Being an “unofficial” version of the famous love story. 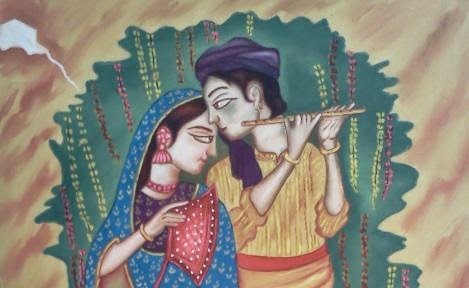 In the village of Takht Hazara there once lived a young man named Dheedo, of the clan of Ranjha. He was the youngest son of a wealthy landowner, and as the youngest, he was a trifle spoiled. Rather than working or managing the family property, he spent his days lazing in the sun and playing his flute.

Unfortunately, his father eventually died, and the sons divided the land amongst themselves. The older brothers never thought much of the youngest, so when they divided the land they gave Ranjha the worst, most infertile part of the property. Ranjha tried to work his land for a while, to no avail. Disgusted, he took his flute and left Takht Hazara.

END_OF_DOCUMENT_TOKEN_TO_BE_REPLACED

This is the first section of a story called “Kupti and Imani” from Andrew Lang’s Olive Fairy Book (1907). The story was collected in the Punjab by a “Major Campbell,” probably in Firozpur. There’s more to it than what I’ve retold, but the first half is the part I like best. I like to find fairy tales where the heroine is an active protagonist, and not just someone waiting to be rescued by a handsome prince.

Once upon a time there lived a king with two beloved daughters, Kupti and Imani, whom he loved very much. He spent many hours of the day talking to them. One day he asked his older daughter Kupti:

“Are you content to leave your life and fortune in my hands?”

“Of course,” said Kupti. “Who else would I leave them to?”

But when he asked his younger daughter, Imani, she said:

“Oh no! I’d rather go out and make my own fortune!”

The king was a bit displeased to hear this, but he said, “Well, if that is what you want, that’s what you’ll get.”

And so he sent for the poorest man in his kingdom, a lame, elderly fakir, and he said,

“As you are so old, and can’t move around much, you could do with someone to help take care of you. My youngest daughter wants to earn her living, so she can do that with you.”

Personally, if I had been the fakir, I’d be a bit worried about this setup. But never fear — all goes well. You can read the story at at my other blog, Ephemera.

In the second half of the story, Imani even rescues a handsome king! But since the antagonist in that section is Kupti (Imani’s sister), I can’t quite love it as much.  If you want to read the whole story anyway, you can find it here.

Last year, while looking up folktales related to the Punjabi winter solstice festival Lohri, I came across the legend of the bandit Dulla Bhatti. Dulla Bhatti was a 16th century “Punjabi Robin Hood” who led a rebellion against the Mughal emperor Akbar. He robbed the Mughal officials who collected taxes and tributes for the emperor, and redistributed the money to the poor. One of the tales told of him is that after a Mughal soldier raped a young Hindu woman, Dulla Bhatti — a Muslim — took her in because no one else would. He arranged her marriage to a Hindu man, gave her a dowry, and even officiated the wedding in as close to an approximation to a Hindu wedding ceremony as he could manage. The stories of Dulla Bhatti are linked to Lohri; you can read my take on that relationship here.

Why am I bringing Dulla Bhatti up now, in the middle of June? Because as I mentioned in my last post, I’ve been reading Rabindranath Tagore. Tagore liked to play with folklore and fairy tale. “The Hungry Stones” is one example that comes to mind; there’s also “Once There Was a King,” “A Fanciful Story” (called “A Kingdom of Cards” in this online translation), and “The Wedding Garland” (“Malyadan” in Bengali — I can’t find it in English online), all of which play with folktale tropes and structure, sometimes explicitly, sometimes more subtly. Tagore’s last short story draft, from about a month and half before his death, is perhaps another example, one with some similarity to the Dulla Bhatti story I mentioned above. In the Oxford Press translation Selected Short Stories, it’s called “The Story of a Mussalmani.”

END_OF_DOCUMENT_TOKEN_TO_BE_REPLACED

I’ve been quiet of late, for which I apologize. Lots of activity (and deadlines) in the data science side of my life. But I don’t want to abandon the other sides of my life, like Multo or dance. I’ve managed to slip in a little combination of the last two, in a new post I’ve written for the Dholrhythms Dance Company blog.

We have some new choreographies to showcase at our upcoming Non Stop Bhangra performance this Saturday. The theme of the night is Hip-Hop/Bhangra fusion, but surprisingly, the songs we’re debuting are both fairly classic folksongs. One of them, by Surjit Khan, is based on a famous Punjabi love story, Sohni Mahiwal.

Once upon a time, on the banks of the river Chenab, near the city of Gujrat, lived a potter named Tulla. Tulla’a pottery was famous, and in demand all through Punjab, and even in lands beyond. Tulla had a daughter who was so lovely that he and his wife named her Sohni (“Beautiful”).

Since Sohni grew up in her father’s shop, she learned how to decorate the pitchers and pots that came off his wheel with beautiful designs: flowers and elaborate patterns. And so the family flourished.

One day a rich young Uzbeki merchant came into Tulla’s shop to buy some of his pottery. The merchant’s name was Izzat Baig. Sohni was in the back of the workshop at the time, painting her designs on her father’s pots. Of course, she caught Izzat Baig’s eye. And since the merchant was not only rich, but young and handsome, I imagine he caught her eye too. Izzat wandered around the workshop much longer than he had intended, sneaking glances at Sohni, and bought many more pieces of pottery than he had planned to. And he came back the next day, and the day after that….

You know this doesn’t end well.

You can read the rest of the story at my other blog, Ephemera.

END_OF_DOCUMENT_TOKEN_TO_BE_REPLACED 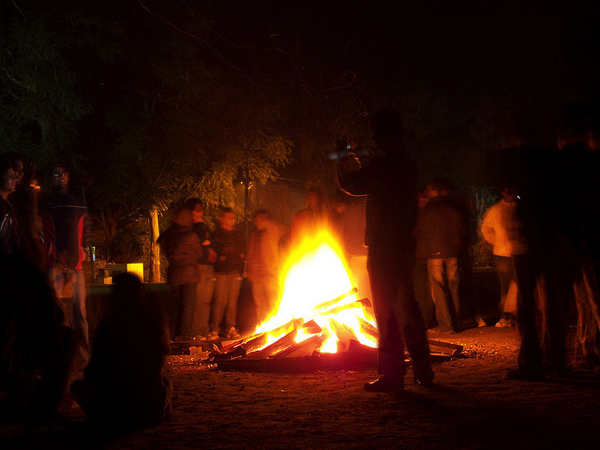 I just wrote a post for the Non Stop Bhangra blog, to celebrate the Punjabi winter solstice festival, Lohri. In addition to marking the waning of winter, Lohri is also associated with marriage and new families. It is celebrated with singing, dancing, the sharing of sweets, and a huge bonfire.

Like any festival, there many stories of how the holiday originated. Some say that it’s in honor of the Sun God (since the days are now getting longer), or the Fire God. Some say that it’s in memory of the sisters Holika and Lohri: Holika is the sister of the demon King Hiranyakashipu. She was killed in a bonfire while trying to burn her nephew Prahlada (a devotee of Vishnu) to death. That bonfire, and the triumph of good over evil that it symbolizes, is celebrated in the spring festival of Holi. I’m not sure how Lohri ended up in that bonfire too, but according to the story, she did, and she survived. And so: the festival of Lohri. Some people say that the holiday is named after Loi (or Lohi), the wife of the mystic, poet, and holy man known as Kabir.

The story I like best, though, is the story of Dulla Bhatti.

Dulla Bhatti (Rai Abdullah Khan Bhatti) was a legendary sixteenth century outlaw from the Sandal Bar area of Punjab, between the Ravi and Chenab rivers, in what is now Pakistan. He led a rebellion against the Mughal emperor Akbar, and is a popular folk hero in Punjab because of his Robin Hood-like acts of kindness to the people. Dulla and his bandits regularly looted the tributes and taxes sent to the Emperor and redistributed them among the poor. Some people say that the Lohri custom of giving money or sweets to the children who go singing from door to door is in honor of Dulla Bhatti’s acts of generosity.

In addition to robbing the rich and giving to the poor, Dulla Bhatti also had a reputation for protecting young women from the, shall we say, depredations of the Mughal occupiers. That part of his legend is also celebrated around the Lohri bonfire.

You can read more about it on my other blog, Ephemera, here.

Honestly, it’s the story that’s least likely to be the origin of Lohri, but it’s a cool story all the same. Enjoy.

The photo above is by Gagan Singh, on Flickr.

I have a post up on the Non Stop Bhangra site, about the famous Punjabi folktale, Mirza Sahiban. It’s a love story about a woman, Sahiban, who elopes with her “milk cousin” Mirza and sets off a feud between his family and hers.

Sahiban, they say, grew up to be so beautiful that when she went to market the grocer would get too confused and distracted to weigh her produce correctly. When she walked by the fields all the farmers would stop their plowing just to stare. Mirza grew up strong and handsome, and was the best shot with a bow and arrow in the region. It’s not too surprising that these two, growing up together so closely, eventually fell in love.

As you might guess, the story doesn’t have a happy ending. You can read my retelling of the tale here.

If you’re wondering about the term “milk cousin”: according to the story, Sahiban’s paternal grandmother died in childbirth, so Sahiban’s father was nursed by another woman, who already had a daughter (also nursing). Because the two children were nursed by the same woman, by tradition they would be considered siblings — “milk siblings”. The nursemaid’s daughter grew up to be — you guessed it — Mirza’s mother. So Sahiban and Mirza were first milk cousins.

At least, this is what all the English language renditions of the story that I found say. Knowing as I do how folktales can get sanitized as they propagate, I can’t help wondering if originally the two lovers were really first cousins by blood, just like in early versions of the tale, Snow White’s jealous, murderous “stepmother” was actually Snow’s biological mother.

Most English language versions of Mirza Sahiban are fairly vague about how Sahiban dies at the end. In my retelling, I had her pierced by arrows as she tried to shield her lover’s body. According to R. C. Temple, in his 1884 Tales of the Panjab, Vol 3, Sahiban’s brothers strangled her for dishonoring the family. This does not show up in modern versions of the story.

Temple goes on to say that the feud that resulted from Sahiban’s elopement was an actual historical thing, and that female children were considered such bad luck because of this story, that female infanticide in the region was done “in memory” of Sahiban. Ick. I take this with a grain of salt — when folklore is collected by the occupiers of a country (Temple was an British army officer who served in India), you have to be extra careful to filter out the colonial attitudes and paternalism that can sneak in, no matter how well meaning the folklorist is. This is as true of Indian folklore collected during the British colonial period as it is of Philippine folklore collected by the Spanish priests or by Americans during the commonwealth period.