Fährmann Maria (Ferryman Maria) is a 1936 fantasy film that IMDB calls “The last classic German Expressionist film made in Germany before the film industry was swallowed up by the Third Reich.” Deutsche Filmothek calls it “arguably one of the 10 greatest films of the Third Reich and together with the 1935 version of Student von Prag, the last great, dark fantastic film from the German tradition in this genre until the end of the Third Reich.”

It’s a lovely film, directed by Frank Wisbar; a mood piece whose style is an interesting mix of silent and sound film techniques. The atmospheric and sometimes abstract cinematography and lighting design show the clear influence of the Expressionist school. It’s a bit short on story, but the visual design and lead actress Sybille Schmitz’s striking presence make it worth a watch.

END_OF_DOCUMENT_TOKEN_TO_BE_REPLACED

Rabbi Yehuda Loew, known to the pious as the “Maharal” came to Prague from Nikolsburg, Posen, in the year 5332 of the Creation (1572 A.D.) in order to become rabbi of the community there. The whole world resounded with his fame because he was deeply learned in all branches of knowledge and knew many languages. Is it any wonder then that he was revered by the wise men among the Gentiles? Even King Rudolf of Bohemia esteemed him highly.

— The Golem of Prague, posted by Dr. Leila Leah Bronner on her Bible and Jewish Studies website (source not given).

In 1913 German actor and filmmaker Paul Wegener was in Prague filming a Faustian tale called The Student of Prague, which he both starred in and produced. While he was there, he learned the legend of the Golem of Prague, a great clay being that was created and brought to life by the Rabbi Loew to protect Prague’s Jewish community. The legend caught his imagination.

The Golem: How He Came into The World (1920) was Wegener’s third Golem movie; unfortunately, the two earlier movies have been lost. The first two times, Wegener placed the Golem in a contemporary time period; with his third attempt, he tried something closer to a straight retelling of the legend as he had heard it.

Wegener was not Jewish [1]; and while Der Golem is a beautiful movie, it’s not terribly authentic. Given the atmosphere in Germany at the time, some see Der Golem as an expression of anti-Semitism. It certainly takes a lot of liberties with the source material, but I didn’t think it was a hostile or derogatory portrayal of the Jewish people as a whole.

There are many versions of the legend of the Golem of Prague; the one on Dr. Bronner’s website, which I quoted above, is my favorite. The general idea is that Rabbi Loew created the Golem to guard the Ghetto of Prague against enemies of the Jewish people. In Bronner’s version, those enemies would plant the bodies of dead children in the home of a Jew, then level a “blood accusation”: the charge that Jews used the blood of Christian children in Jewish ritual (in this case, to make Passover matzos). Loew brought the Golem to life from a clay figure with cabalistic ritual; in some versions, he does this by writing the word emet (truth) on the Golem’s forehead, in other versions, by writing God’s secret name on a piece of parchment and putting it into the Golem’s mouth. END_OF_DOCUMENT_TOKEN_TO_BE_REPLACED

Inspired by the comments section from my last post, I’m continuing the “murderous hands” theme with Robert Wiene’s 1924 silent film, The Hands of Orlac, the story of a concert pianist whose hands are destroyed in a terrible train accident. He receives the transplanted hands of an executed murderer as replacements, but rather than play the piano, these hands apparently want to continue the bad habits of their previous owner… .

I liked it — a lot. I liked it even better than Wiene’s more famous film, the 1920 Expressionist classic The Cabinet of Dr. Caligari (which I also watched the same evening that I watched Orlac).

Caligari, in addition to its Expressionist credentials, is considered by many to be the first horror movie. Orlac, despite its plot, is not a horror movie, but proto-noir. The German Expressionist filmmakers had a big influence on the style of what became film noir (and also on the content of noir, with movies like M and The Testament of Dr. Mabuse); you can really see this in Orlac‘s play of light and shadow. 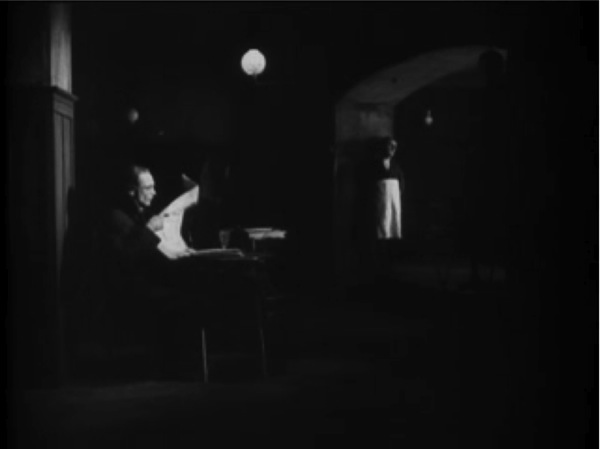 Expressionist film (the Expressionist movement in general) focused on subjective, emotional reality rather than physical reality; to convey this inner reality, Expressionist filmmakers and actors borrowed technique from dance, theater, and the visual arts. Caligari, for instance, is famous for its weird, surreal sets, with their crooked perspectives and their painted-on splashes of light and shadow, as well as for its fantastical costuming and makeup. Orlac relied more on lighting, on artful scene arrangements and framing, and on sets that were more theatrical than naturalistic (though not surreal).  It reminded me of Akira Kurosawa.

Kurosawa played with techniques from Noh and Kabuki theater, most famously in his stylized 1957 version of Macbeth, Throne of Blood, but also in his early (1945) film The Men Who Tread on the Tiger’s Tail, which is based on the Kabuki play Kanjinchō, which is in turn based on the Noh play Ataka, about the twelfth century warrior Minamoto no Yoshitsune. In Tiger’s Tail you can already see the hallmarks of the Kurosawa style: the posed tableaus and geometrical arrangements of actors, as well as the digressions into folk or classical song and dance so common in his Samurai pictures. The sets in those two movies were fairly theatrical, too — probably for budget reasons, with Tiger’s Tail. Think, also, of the bare white sands of the courtyard where witnesses gave testimony in Rashomon (I think he used that same courtyard for the penultimate scene of Hidden Fortress, too), and the Gondos’ wide, clean living room in High and Low.

Lady Macbeth, I mean Asaji, tries to wash the blood off her hands, in Throne of Blood. “Out, damned spot! Out, I say!”
Note actress Isuzu Yamada’s facial expression and exaggerated makeup, which together are meant to suggest a classic Noh mask.
You can watch the entire clip here; it’s tremendous.

But maybe I’m only reminded of  Kurosawa because I watch so much of him. Anyway. Back to Orlac. END_OF_DOCUMENT_TOKEN_TO_BE_REPLACED