What do Mario Bava and Star Trek have in common? Hopefully, Strange New Worlds. Let me explain… 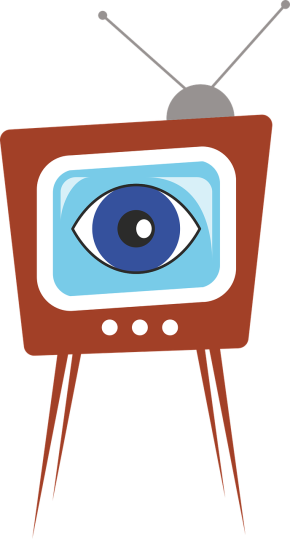 I don’t consider myself a particularly die-hard Trek fan: the only Star Trek series that I’ve seen in their entirety (and the only ones I rewatch) are The Original Series and The Animated Series. I’ve seen parts of all the Trek series from the nineties/early 2000s, and enjoyed them well enough, but I can’t say I was ever a super enthusiast.

The first Trek series comes from the era of The Twilight Zone, Outer Limits, and other similar anthology series. It definitely shares some of the weird tale sensibilities of those shows, as well as Rod Serling’s insight that speculative fiction is an effective and relatively subtle vehicle for addressing current events and controversial ethical issues. And as speculative fiction goes, I prefer the uncanny to science fiction. To the extent that later Trek shows lost that eerie, weird tale vibe, I correspondingly lost interest.

So I’ve not been following so-called “Nu-Trek,” nor had any desire to. But my husband watches Star Trek (pre Nu-Trek) more enthusiastically than I, and he’s been following the fan discussions about the new shows. The word on YouTube seems to be that Strange New Worlds has got that Original Series vibe. My husband got curious enough to sign up for a trial period of Paramount+, and so far, we’ve watched the first three episodes. I’m liking it.

END_OF_DOCUMENT_TOKEN_TO_BE_REPLACED

Because I always appreciate a good bit of literary sleuthing.

I’m not sure what got me thinking about The Ghost and Mrs. Muir. I haven’t seen it in years, but it’s a movie I remember enjoying, one that’s right up my alley. Wikipedia tells me that it’s based on a short novel by R. A. Dick, the pseudonym of an Irish writer named Josephine Leslie (1898-1979). 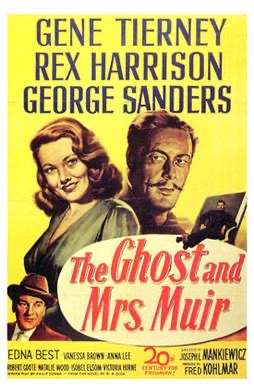 On an impulse, I bought the novel; and while I was at it, I did a little digging for other work by Ms. Leslie. I got intrigued by the title of a play she wrote, Witch Errant; the only plot information I could find is from an old playbill. I can’t find a copy of the play to read.

But while I was searching, I came across something fun.

END_OF_DOCUMENT_TOKEN_TO_BE_REPLACED

Lately, I’ve been folding laundry while listening to the Vincent Price radio drama The Price of Fear. The episodes are excellently written, and often based on a well-known horror short story.

Not only does Price narrarate each episode, but he’s been folded into the adaptations as a character. Well acted, and fun to listen to. And each episode is the perfect length for a load of laundry!

So far, I’ve listened to four episodes, and I’m really enjoying it.

You can find the episodes at the Internet Archive.

Here’s another link, which includes short descriptions of each episode, as well.

I’ve wrapped up my current Dark Tales Sleuth case by posting the Table of Contents and Attributions for Volume Three of Evening Tales for the Winter. For this last volume, I mostly relied on the attribution information from ISFDB, and limited my research to tracking down original publication information, and more readable versions of the stories. However, one story earned a little more attention: “Nina Dalgarooki.”

Unlike the other stories in this volume, “Nina Dalgarooki” is in fact supernatural; it’s a sort of satirical adult fairy tale about a beautiful Russian countess who wants to turn her beauty on and off: to “ration” it, for when good looks are truly needed. She finds a wizard to help her accomplish exactly that, and takes this power to Siberia, Paris, and London, with amusing results. It’s rather a fun piece!

ISFDB did not credit the story, but I found a snippet from The London Morning Post that attributed the tale to “Mrs. Lytton Bulwer,” the wife of the novelist known at the time as Edward Lytton Bulwer, and now known to us as Edward Bulwer-Lytton. You know: “It was a dark and stormy night” Bulwer-Lytton. The Post snippet said favorable things about “Nina Dalgarooki,” which is significant, in light of what happened afterwards… .

END_OF_DOCUMENT_TOKEN_TO_BE_REPLACED

Somewhat over a year ago, I started the Dark Tales Sleuth blog to record my progress tracking down the sources of unattributed stories in the 1856 three volume anthology, Evening Tales for the Winter. I’ve been working on the project on and off since then, and yesterday I wrapped up what I could discover about Volume Two!

Of the last four stories in Volume Two, two were non-supernatural crime or adventure tales, one was arguably a ghost story, and the last a gothic demon tale. I’ve already featured Charles Macfarlane’s “Hungarian Robbers” in my Classic Crime series, so no more needs to be said about that.

END_OF_DOCUMENT_TOKEN_TO_BE_REPLACED

A few months back on my Dark Tales Sleuth site, I wrote about The Necromancer; or the Tale of the Black Forest, which was one of the seven “horrid novels” mentioned in Jane Austin’s Northanger Abbey. The Necromancer is a 1794 translation of the German gothic novel Der Geisterbanner (1792), by “Lorenz Flammenberg” (Karl Friedrich Kahlert). 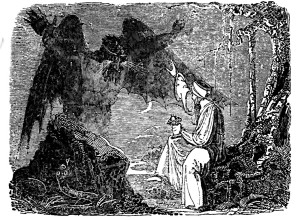 In my Dark Tales Sleuth post I wrote about having traced down an even earlier (1793) translation of the first half of Der Geisterbanner, by “T. Dutton.” In the post, I pointed to a convenient (but later — 1825) place to read it.

Now The Ex-Classics Website has posted T. Dutton’s translation, taken from the original publication sources, along with the translator’s original footnotes! So you can read this version of The Necromancer (Part I) as it was originally published.

Illustration from The Ex-Classics Website; I believe it’s taken from The Astrologer of the Nineteenth Century (1825), where this story was republished.

I recently spent an evening listening to Andreas Sommer’s three-part YouTube series, Poltergeist Phenomena and the History of Science. The series is based on an early post from Sommer’s Forbidden Histories blog, “The Naturalization of the ‘Poltergeist‘” (the linked article also posts to the YouTube videos). Really interesting article and video series; I recommend it.

One of the things Andreas mentions in passing (in Part 3, if I remember correctly) is the real-life haunted house experience of noted psychoanalyst Carl Jung. Jung eventually wrote about this experience as a chapter of Spuk. Irrglaube oder Wahrglaube? (Hauntings. False Belief or True?), a 1950 collection of case studies of hauntings and poltergeists edited by the zoologist and researcher of paranormal phenomena Fanny Moser.

Jung had this experience in the summer of 1920, when he was in England to give a series of lectures. His host, “Dr. X,” arranged for Jung (and himself) to spend weekdays in London for the lectures, and weekends in the country at “a charming cottage” that rented for “a ridiculously low price.”

No regular reader of ghost stories will be at all surprised at what happens next.

END_OF_DOCUMENT_TOKEN_TO_BE_REPLACED

Remember my other blog, The Dark Tales Sleuth? That’s where I’m tracking down the sources of the unattributed stories in the 1856 anthology, Evening Tales for the Winter, edited by Henry St. Clair. I’m still working on it! 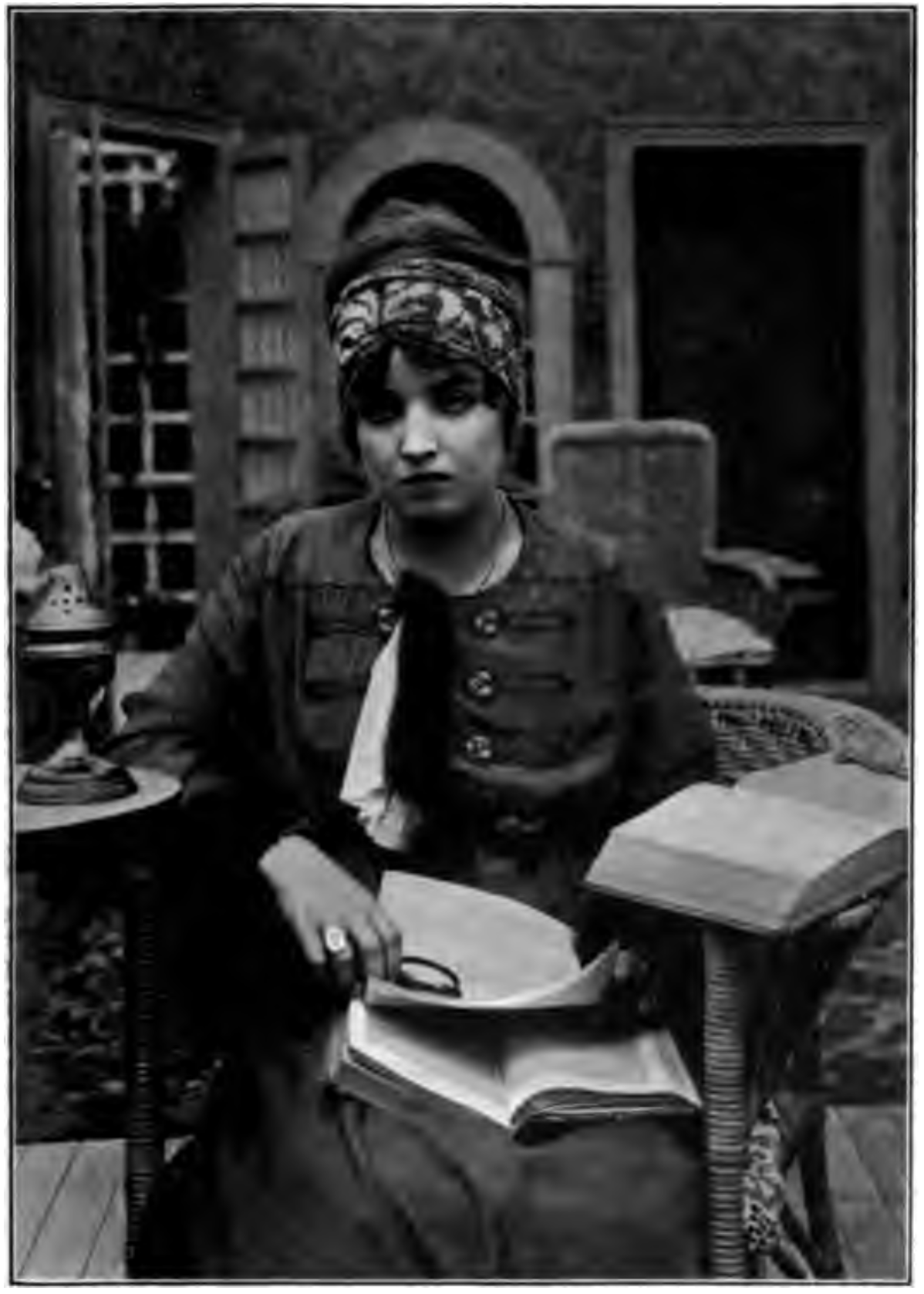 After wrapping up Volume One, I started on Volume Two with what seemed like a straightforward case, which quickly turned super interesting. I began with what I thought was a plagiarism of one of the seven “horrid novels” from Jane Austen’s Northanger Abbey, and found what I think is an alternative (and earlier!) translation of the first section of the German source novel. Pretty cool!

END_OF_DOCUMENT_TOKEN_TO_BE_REPLACED

As if I didn’t have enough to do, I’ve started another blog. Introducing The Dark Tales Sleuth!!

It started when I came across an old anthology called Evening Tales for the Winter (1856). The first few stories included some interesting gothic tales, some implied to be translated from German; the book looked to be a potential source for good stories to share for Winter Tales season. So I started reading.

I noticed, though, that nothing was attributed: no authors, no translators, no information at all. This annoys me.

END_OF_DOCUMENT_TOKEN_TO_BE_REPLACED

As promised, I’ve been meaning to write a post specifically about the Philippines-related articles in the October, 1900 issue of Colored American Magazine (the issue with the Pauline Hopkins’ short story “Talma Gordon” in it).

But in the end, I can’t think of anything to say, except: read the articles for a view of what some contemporary Black American writers had to say about U.S. expansionist policies at the time, and about their various perspectives on the world in general. Read multiple issues from The Digital Colored American Archive, for that matter. I’ll just quote a passage that caught my eye, from the article “Negro and Filipino,” which was reprinted in the October 1900 issue from the Lewiston Journal (author unknown):

Political demagogues who cry upon the corners for liberty to the Tagalogs and the Sulus shut their eyes and ears to the disfranchisement of this people whom Lincoln freed.

Anti-imperialists who sweat blood because McKinley, in obedience to the Senate, assumes to place the flag in Manila and to defend it there, are silent over the act that Louisiana and Mississippi pass laws that admit the vote to white men who cannot read or write and deny it to black men because they cannot read or write.

The fact is, that here in this nation the very sins which they wrongfully impute to the Republican party in the Philippines, they cultivate and promote within the body politic of the states of the nation that hate the Negro and seek to relegate him to ignorance and superstition in order to perpetuate his servility and his dependence.