I’ve been quiet of late, for which I apologize. Lots of activity (and deadlines) in the data science side of my life. But I don’t want to abandon the other sides of my life, like Multo or dance. I’ve managed to slip in a little combination of the last two, in a new post I’ve written for the Dholrhythms Dance Company blog.

We have some new choreographies to showcase at our upcoming Non Stop Bhangra performance this Saturday. The theme of the night is Hip-Hop/Bhangra fusion, but surprisingly, the songs we’re debuting are both fairly classic folksongs. One of them, by Surjit Khan, is based on a famous Punjabi love story, Sohni Mahiwal. 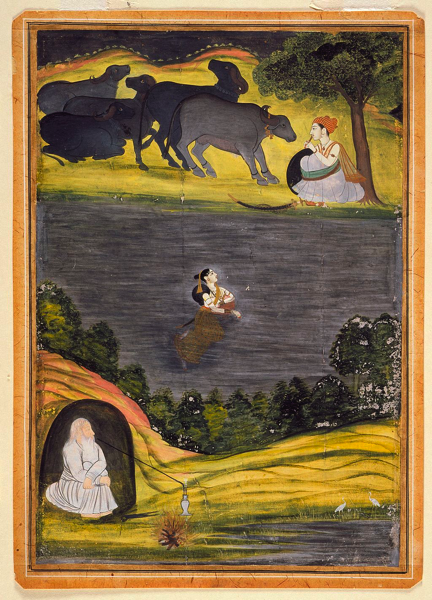 Once upon a time, on the banks of the river Chenab, near the city of Gujrat, lived a potter named Tulla. Tulla’a pottery was famous, and in demand all through Punjab, and even in lands beyond. Tulla had a daughter who was so lovely that he and his wife named her Sohni (“Beautiful”).

Since Sohni grew up in her father’s shop, she learned how to decorate the pitchers and pots that came off his wheel with beautiful designs: flowers and elaborate patterns. And so the family flourished.

One day a rich young Uzbeki merchant came into Tulla’s shop to buy some of his pottery. The merchant’s name was Izzat Baig. Sohni was in the back of the workshop at the time, painting her designs on her father’s pots. Of course, she caught Izzat Baig’s eye. And since the merchant was not only rich, but young and handsome, I imagine he caught her eye too. Izzat wandered around the workshop much longer than he had intended, sneaking glances at Sohni, and bought many more pieces of pottery than he had planned to. And he came back the next day, and the day after that….

You know this doesn’t end well.

You can read the rest of the story at my other blog, Ephemera.

END_OF_DOCUMENT_TOKEN_TO_BE_REPLACED

Possible history of the term “hokey-pokey”. Apparently, it was a term for ice cream sold by Italian street vendors in the UK: “Gelati! O che poco!” — or something like that. Except in the UK, they call it the Hokey Cokey. Hmmmm…

Oh well. Now if you’ll excuse me, I’m heading out for some ice cream, and then I’m gonna dance a jig…

Cowboys worry a lot about hell, don’t they?

“The Hell-Bound Train” is a traditional cowboy song, basically on the same theme as “Riders in the Sky”. A drunk old cowboy dreams of a train to hell. Its demonic engineer taunts his terrified passengers about the sinful lives they’ve led — “You’ve bullied the weak, you’ve robbed the poor, The starving brother you’ve turned from the door” — and how it’s time for them to have their due. The whole experience frightens the poor cowboy so much that he turns from his drunken ways: “he never rode the hell-bound train.”

Chuck Berry did a nice version of the song in 1955 (it was the B-Side to “No Money Down”). His version is called “Downbound Train”, and the Devil talks about the train approaching “home”, instead of that other H-place. Other than that, the lyrics are close to Jack Thorp’s version.

“Riders in the Sky” was written by Stan Jones, and first recorded by Burl Ives in 1949. My favorite version is the 1979 recording by Johnny Cash:

The old cowboy in the song sees the devil’s herd riding through the sky, chased by the exhausted ghosts of damned cowboys, who will never catch them. One of the ghosts stops and warns the old cowboy to mend his ways, or he, too, will be chasing the herd for all eternity.

END_OF_DOCUMENT_TOKEN_TO_BE_REPLACED

Whoosh! It’s been a minute since my last post, hasn’t it?

For some reason, I’ve been listening to what you might call “folkloric music” lately. That is, music that tells a folktale or a tall tale — or at least, a “folktale-like” story.  Today’s example: Charlie Daniels’ “The Devil Went Down to Georgia”.

The song tells the story of a fiddle player named Johnny, who is challenged to a fiddle contest by the devil. If Johnny wins, he gets a solid gold fiddle —

But if you lose, the Devil gets your soul…

Here’s the Primus version, which I admit I like better than the Charlie Daniels’ version. It comes with a cool Claymation video: