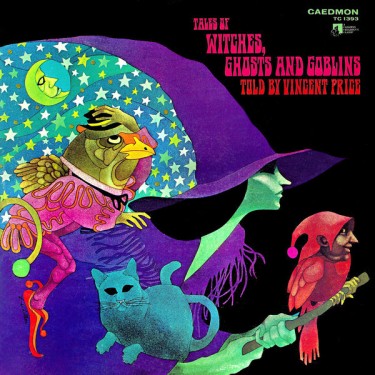 As with Graveyard, the stories Price reads here are folktales, not horror. There are a couple of “recipes,” some verses, and a passage from an account of a witch trial. Three stories are again from Carl Carmer, just as lovely and romantic as the pieces on the other LP. “The Smoker” was delightful, and “Gobbleknoll” was fun, too.

In his readings, Price only gives the authorship of one piece, the first verse of “The Broomstick Train” by Oliver Wendell Holmes. So here’s my educated guess at the rest. Thanks again to Jenny Ashford from the Facebook group Alone with the Horrors: Horror Fiction for her research. Again, I haven’t read all of the texts mentioned below, so these attributions aren’t guaranteed. But I’m pretty sure they’re right.

END_OF_DOCUMENT_TOKEN_TO_BE_REPLACED

Caedmon Records, founded in 1952, was the first company to sell spoken word recordings to the public; the predecessors of the audiobook, you might say. I spent most of this past Sunday afternoon listening to some wonderful Caedmon recordings from the 1970s, of ghost tales and fantasies read by Vincent Price and Boris Karloff. They were the perfect way to relieve the tedium of folding laundry and other chores. 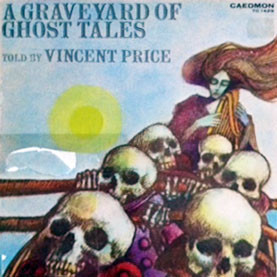 The first one I listened to was A Graveyard of Ghost Tales (1974), read by Vincent Price. You can (at the moment, anyway) find the entire LP on YouTube; I’ve linked to it at the bottom of the post. Price’s smooth and expressive voice is always a pleasure to listen to, and the stories were engaging, more like ghostly folktales or urban legends than horror stories, but that suited me just fine. I especially liked “The Ghostly Hand of Spital House.” Price’s rendition of “The Leg of Gold” was fun to listen to, as well.

I was surprised, though, that neither this LP nor the second one I listened to (also read by Price) gave any credits for the readings. The listing for the album on Discogs gives editing and illustration credits, but very little information about who wrote the pieces that Price read. I couldn’t find any information on literary sources anywhere online. So I decided to do a little digging on my own.

END_OF_DOCUMENT_TOKEN_TO_BE_REPLACED

Happy Boxing Day! My folklore-themed winter tales series continues until Epiphany, so I have at least one more story to share with you this round.

Admittedly, this one is a bit of a stretch, both in terms of its winteriness and its folklore connections, but I like it. It’s an occult detection/haunted house tale that touches on a certain infamous real-life incident. The sort of incident that is so notorious that it often finds itself moving into the realm of legend. I won’t spoil it for you.

Poor Mr. Chadwick buys a house as an investment upon his retirement. He’s a careful buyer who researches before purchasing: whether it’s a respectable, healthy neighborhood; whether the house is watertight, with good drainage and in good repair. But no matter how careful you are, you always forget something.

‘It was really nobody’s affair,’ the next-door neighbour protested. ‘How could anybody warn you? Of course you might,’ he added, as the aggrieved Chadwick breathed threats relating to the ex-landlord of his new demesne and the house agent. ‘Still, I must remind you it’s a penal offence to kill people, even if they have landed you with one of the most notorious haunted houses in England.’

But you guessed that already, because you read my blog. 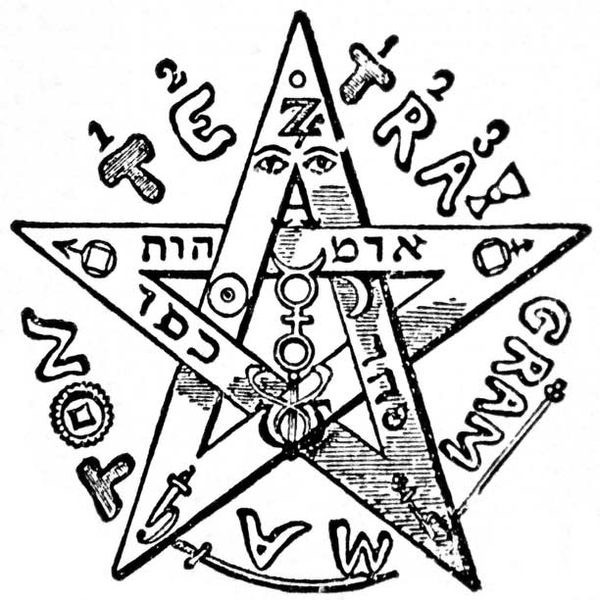 After a bit of investigation of his own, Chadwick turns to his old schoolfriend Lester Stukeley. Stukeley’s day job is Civil Servant, but on the side he’s a psychic investigator who seems to follow the Carnacki school of investigation (William Hope Hodgeson’s Carnacki stories were originally published over the period 1910-1912; Jessie Douglas Kerruish’s “The Swaying Vision” appeared in 1915, in the The Weekly Tale-Teller). What could possibly haunt this ordinary, and quite newly-built house? Chadwick and Stukeley mean to find out.

END_OF_DOCUMENT_TOKEN_TO_BE_REPLACED

In which I search out the folktale inspirations for Hans Christian Andersen’s “The Emperor’s New Clothes” and “The Swineherd”. 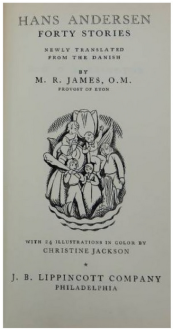 I’ve been reading M.R. James’ 1930 translation of Hans Christian Andersen, Forty-two Stories, which is a delight. I’ve realized that, while I’m familiar with Andersen’s most famous tales, I’ve mostly only read retellings of them, rather than reading them in Andersen’s own (translated) words. It makes such a difference! Andersen’s prose (as channeled through James, at least) is so beautifully clean and unadorned; more modern than I would have expected.

Many (though not all) of Andersen’s tales are direct retellings of folktales, albeit with his own unique voice and special details. Other tales borrow from traditional stories to a greater or lesser degree. In the preface to his translation, James gives a bit of information about the folk origins of several tales, based both on what Andersen himself said, and on James’ personal research.

Let’s explore “The Emperor’s New Clothes” and “The Swineherd.”

END_OF_DOCUMENT_TOKEN_TO_BE_REPLACED

In which Giulla and Feristemo find each other, and take a little revenge. From the Peregrinaggio.

When last we saw them, Feristemo and Giassamen had finally learned Giulla’s whereabouts, and were making plans to rescue her.

Giassamen happened to know that quite near Giullistano, where Giulla was held, there was a grand palace whose owner was greatly in debt to the king (ah, back taxes). So the palace was up for public auction. With Feristemo’s approval, Giassamen took a large sum from the money that Feristemo’s father had given to them, and, while posing as a foreign merchant, bought the palace. He and Feristemo furnished the palace luxuriously, then set up residence there.

END_OF_DOCUMENT_TOKEN_TO_BE_REPLACED

Another tale from the Peregrinaggio

Once upon a time in the land of Serger, in the city of Letzer, there ruled a wise and just king. He was good to his subjects and welcoming of foreigners. When the king died, his eldest son inherited the throne.

Sadly, the new king was the exact opposite of the old king. He was malicious and greedy, and sowed discord and suspicion where before there was none. In fact, after the old king died, the new king had his own younger brother executed, and threw his brother’s son — and his own daughter — into prison. Because of the new king and his corruption, Letzer became such an unhappy place that people left, in droves.

Among the people who stayed were two old men, lifelong friends, wealthy and respectable. One had a daughter named Giulla, the other a son named Feristemo, both about the same age. The two fathers’ dearest wish was that their children would fall in love and get married.

END_OF_DOCUMENT_TOKEN_TO_BE_REPLACED

A tale from the Peregrinaggio. WARNING: lots of dead animals.

The land of Becher was once ruled by an Emperor who had four wives. His favorite wife, the Empress, was his uncle’s daughter; the other three wives were daughters of great princes. This Emperor was a wise man of great learning, and he enjoyed the company of other learned and artistic minds. As a result, his court was always full of scientists and philosophers and poets and artists and other brilliant, cultured people. 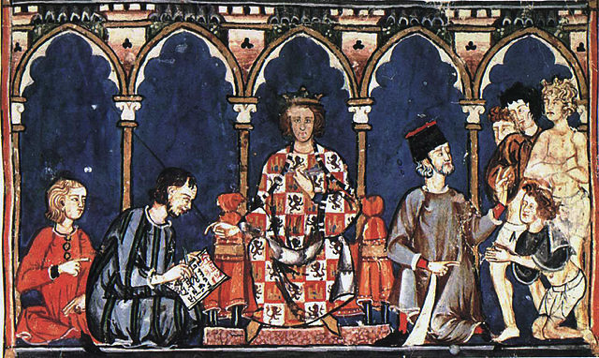 One day the Emperor sat conversing with an aged philosopher who had traveled widely and seen many things. This philosopher told the Emperor that in the far western lands, he once met a man who knew how to transfer his life spirit and soul into the body of a dead animal, and then back again. This man had taught the philosopher the secret.

END_OF_DOCUMENT_TOKEN_TO_BE_REPLACED

Another adventure of the Three Princes of Serendip, from the Peregrinaggio. 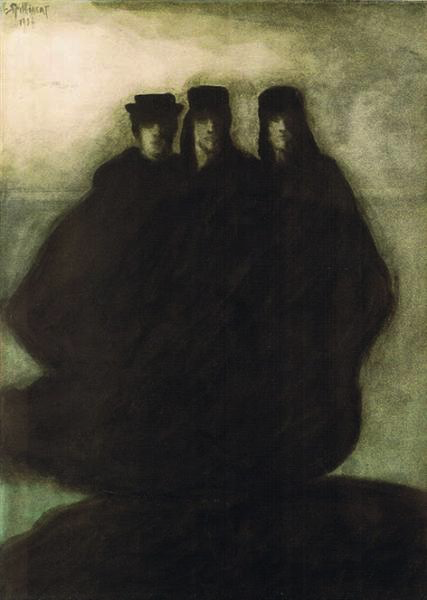 When we finished the last post, the three princes of Serendip were staying comfortably as guests of the Emperor Beramo, who much appreciated their company and their conversation. After the brothers saved Beramo from an assassination attempt by one of his own counselors, Beramo decided to ask them to help him with a problem that had vexed him since he began his reign. This is the story he told them:

END_OF_DOCUMENT_TOKEN_TO_BE_REPLACED

The tale that gave us the word serendipity, and possibly the classic detective story. 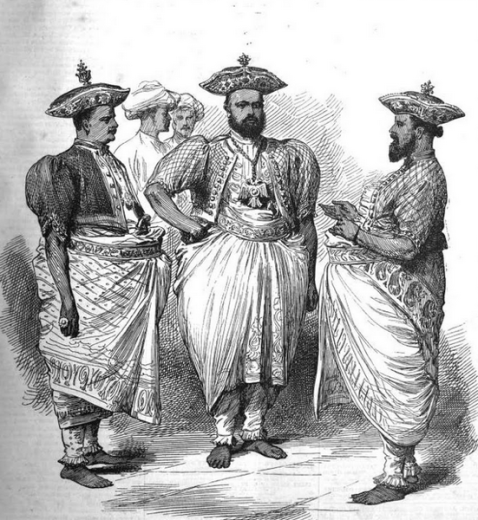 Once upon a time, in the land of Serendip, there ruled a wise and powerful king, Giaffer. He had three sons whom he loved very much, and he wanted to leave them not only his kingdom, but all the knowledge and virtues that the rulers of a great kingdom should have. So he gathered great scholars from all over his realm, each with a different specialty, and set them as tutors to his sons. The king bade each tutor to instruct the princes so well that any expert who encountered them would immediately recognize who their teacher was. And so the tutors did.

Because the princes were all highly intelligent, it took hardly any time for them to become experts in science and language and philosophy and all the other subjects that they studied, and soon they were far more knowledgeable than any other young princes or nobles of the same age and rank. The tutors returned to the king to report on how much progress the princes had made. The king was a bit skeptical that the princes could have gained so much knowledge so quickly, so he decided to test them.

END_OF_DOCUMENT_TOKEN_TO_BE_REPLACED

The second of two tales about the Chinese Weaver Goddess, Zhinu, the daughter of the master of Heaven, (the Jade Emperor). As the Weaver Goddess, she either weaves her father’s royal robes out of the clouds, or else weaves the clouds and the rainbows themselves (it seems to vary, depending on what you read). Her mother, the Celestial Queen Mother, created the Silver River (the Milky Way).

This is the story of Zhinu and her other mortal husband, Niulang. 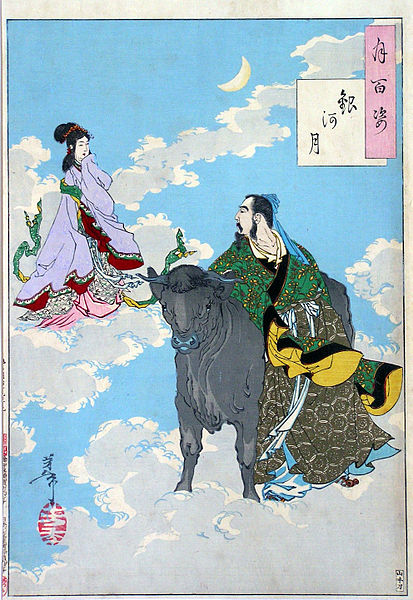 The Weaver Maiden and the Cowherd

Niulang was a poor cowherd, with nothing in the world but an old, worndown Ox. Unbeknownst to Niulang, the Ox was a Celestial being, whom the gods exiled to Earth as punishment for… well, I don’t know what. On a day like any other day, as Niulang led his Ox to the fields, to his great surprise, the Ox turned and spoke to him!

“Why?” said the Niulang — as soon as he got over his surprise at owning a talking Ox.

“You’ve been a good master. I want to repay you. Trust me,” the Ox said.

So down to the river they went. What the Ox knew — and Niulang didn’t — was that this particular bend of the river was a favorite bathing spot for the Jade Emperor’s seven daughters. As Niulang approached, he saw the sisters splashing in the water. He especially noticed the youngest one — Zhinu. The Ox noticed Niulang’s infatuated expression, and he helpfully pointed out the seven piles of clothing neatly stacked on shore.

“The robe the color of the sunset is Zhinu’s,” the Ox said.

So Niulang snuck to the shore as the sisters swam and splashed, and stole the robe that was the color of the setting sun. Eventually, the sisters finished their baths, scrambled to shore, put on their robes, and flew back up to the heavens. All except poor Zhinu.