Ghost Stories from the Classics

Work has been quite busy lately, and likely to stay that way. I haven’t had much chance to blog. So a quick note to introduce a little set of stories that I collected a few months back, to share with you, my readers: ghost stories from classical literature.

None of these supernatural tales are at all spooky to the modern reader. What’s fun about them is that you can see in these usually brief anecdotes the germination of some well-known folktales and urban legends. Often, these excerpts from early writers of the classical Greek or Roman eras are the earliest examples of well-known tales. I’ve posted some examples to Ephemera, and I’ll post a few more as time permits. 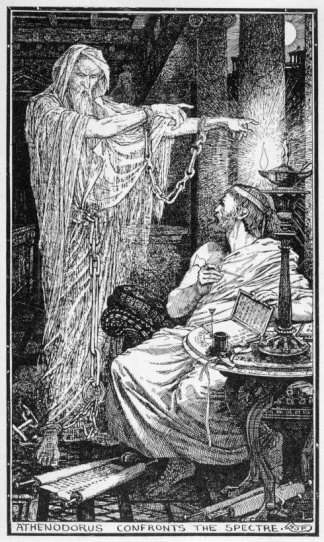 Some Ghost Stories by Pliny The Younger

The first of Pliny’s tales is a well-known haunted house story, and probably the origin of that stereotype of spectres in chains. Come to think of it, this is probably the only ghost story I’ve read where the ghost was actually in chains. The story is also an early example of the Aarne-Thompson-Uther (ATU) folktale motif 326A (“Soul released from Torment”). One could argue that it’s an early example of the occult detective genre, as well, since Athenodorus rented the house in question specifically to investigate the rumors about the spectre.

The second anecdote could be considered a poltergeist tale, where again the poltergeist seemed to have a message to send.

This is probably the original Sorcerer’s Apprentice story (ATU 325), with all the tale’s recognizable elements (except Mickey Mouse).

The next two tales, one from Cicero and one from Aelian, seem to be two variations of the same story, about a murdered man who appears in another’s dream to expose the murderer. As Cicero points out, this story was already well known when he wrote it down, so I think we can call this one an urban legend.

Hope you enjoy these little excursions into the classics. I have at least two more, that I will post as time permits.

Featured image: Illustration by George Scharf for A History of Greece, by Leonhard Schmitz (based on the work of Connop Thirlwall) (1863). Source: Picryl.