Vincent Price and Hands of Glory

Over on Dark Tales Sleuth, I’ve revisited a tale from one of the Vincent Price’s Caedmon spoken word recordings that I did an attribution search on way back when. 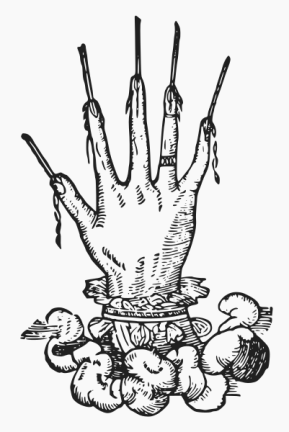 One of the pieces that Vincent Price reads on his 1974 spooky tales album, A Graveyard of Ghost Tales, is a story called “The Ghostly Hand of Spital House,” by Dorothy Gladys Spicer. This is a fun and engaging tale about some bandits who try to rob an inn with the help of a hand of glory : a candle (or candle-holder) made from the hand of a hanged man. Lighting the hand of glory puts all the sleeping occupants of the house into an even deeper sleep, from which they don’t awaken until the hand is extinguished. You can see how this would be a (cough) handy tool for robbers and catburglars to have.

In the post, I also talk about a supposed pre-Colonial Mexican analog to the hand of glory as a housebreaker’s tool: the left arm and hand of a woman who died in first childbirth. While the source for that piece of folklore was not exactly disinterested (it was written by a 17th century Spanish friar), the story does in a way tie in with how Aztecs regarded women who died in childbirth, as equivalent to warriors who die in battle.

Have I intrigued you yet? If you’d like to read some earlier versions of the Spital House legend, give another listen to Vincent Price’s spooky reading, and learn how this relates to aspects of Aztec mythology, then head on over to Dark Tales Sleuth, and check out The Legend of Old Spital Inn.

Illustration of Hand of Glory, annotated as from The Grimoire of Pope Honorius Grimorium Verum Petit Albert by Albertus Parvus Lucius. Source: Wikimedia.

2 thoughts on “Vincent Price and Hands of Glory”