Better than B: A Short and Idiosyncratic List of Films

I’m more of a reader than a movie buff, but there are times (especially this past year, and—whoo-boy!— this past week) when my mind is too unquiet to focus on a book. At times like that, or times when I’m just too tired to attend to a text, I reach for an easy-watch movie. By this I mean a movie that’s not too heavy or weighty or intellectual, that’s fun and light and easy to follow, and preferably one that doesn’t overstimulate the senses: not too much gore or violence, no dizzying action (unless it’s silly), no cacophonic soundscape. A movie I can watch with a bowl of popcorn and my brain turned to “low.”

I think everyone has a set of movies or TV shows that they turn to in times of stress; different people find comfort in different genres. I often find that B-movies or “programmers” from the 1950s and 1960s do the trick nicely.

Every so often, though, I’ll turn on a movie that I think is of that type, only to realize — Hey! This movie is actually good! Yes, I have to turn my brain back on, but that’s probably a good thing anyway. These discoveries are always a pleasant surprise.

So here’s a short list of some movies I’ve stumbled on this way. I’m sure film buffs will read the list and say, “Duh!”, but hey—they were delights to discover for me.

Skeptical psychology professor John Holden comes to London for a conference and discovers that his colleague Henry Harrington is dead; a tragic accident. Harrington’s niece Joanna thinks it’s related to her uncle’s investigation into a witch cult led by one Julian Karswell. Holden plans to continue Harrington’s investigation, and Karswell isn’t too happy about that….

I first watched this because it’s (loosely) based on the M.R. James story “Casting the Runes,” which is my favorite of James’s ghost stories. Beyond that, I didn’t know much about about the film, and its title sounds like a B-movie, so….

Once I saw who the director was, I know it would be special. But it was intended as a B-movie/programmer, and apparently a lot of the people who worked on it thought of it this way. Yes, the demon is cheesy. But the film is really an excellent and thoughtful meditation, not so much on belief versus skepticism (which is what it seems like), but on the dangers of preconception bias and the true nature of an open mind.

The film has some beautiful and atmospheric scenes, as one would expect from Jacques Tourneur; some great cinematography, some good (if inexpensive) effects, and some silly ones. That leopard! I didn’t care for the demon the first time I watched the movie, but I’ve warmed up on it in subsequent viewings. The long shots of the demon are really quite good, and I’m kind of fond of its King-Kong like final appearance. I think I’d still get rid of the closeups, though.

The acting is strong, and the main characters are fairly well-rounded. Dana Andrews and Peggy Cummins are solid, and Niall MacGinnis as the menacing and yet affable (and almost sympathetic) villian, Karswell, is a wonder to watch. Athene Seyler is also excellent as Karswell’s mother, who is torn between loving her son and abhorring the evil of his witch cult.

All of the above is with reference to the 96 minute pre-release version (sometimes called the UK version), which was brought back out some time in the mid-’80s and is the version I watch. From the sound of it, the shorter 82 minute version that was originally released loses some of the nuance of the longer version, and perhaps is more like the classic B-movie that the movie was intended to be. Some people do prefer the shorter version, but I stick with the long cut. 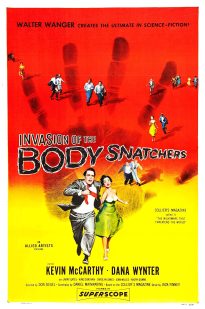 Small town doctor Miles Bennell’s patients keep coming to him with an odd delusion: their loved ones are imposters. Then all of a sudden, they don’t. Meanwhile, Bennell’s friend makes a strange discovery, and things start to get scary and weird.

I’ve written about this movie before; I sat down expecting sci-fi schlock and instead got intelligent and engaging horror noir. The 1978 version, directed by Philip Kaufman, is also excellent [1].

A wheelchair-bound young woman, Penny Appleby, comes to France to visit her father for the first time in ten years, but he’s not there. Her father’s second wife Jane seems kind, but keeps making excuses for Penny’s father’s absence. And why is Mr. Appleby’s friend, Dr. Gerrard, constantly in the house, even in Mr. Appleby’s absence?

When you hear about a Hammer movie called Scream of Fear, what do you expect? Not this tense, spooky, and non-gory thriller. Supposedly, Christopher Lee said that of all the Hammer films he did, this is the one he is most proud of.

I really like this movie. The whole atmosphere oozes suspense: what happened to Penny’s father? What’s going on with Dr. Gerrard and Jane? Is Penny being haunted, or is she losing her mind? The plot takes some sharp twists, and the villain is truly creepy.

I think Scream of Fear gets overlooked because it’s so un-Hammerlike, and that’s really a shame. It’s not Hitchcock, but it’s worth seeing.

A young doctor witnesses the sinister relationship between his distinguished mentor, Dr. McFarlane, and the ruthless resurrection man who supplies McFarlane with illegal cadavers. Based (loosely) on the short story of the same name by Robert Louis Stevenson.

I went through a Boris Karloff phase a little while back, and I always love his performances. But I have to say that, aside from his acting, a lot of his films that I’ve watched, while enjoyable enough, are pretty forgettable. I think Karloff felt this way about his films himself; that’s why did a lot of theater. So when I turned on The Body Snatcher (which features both Karloff and Bela Lugosi, another actor who was often better than his material), I wasn’t expecting more than a no-brainer popcorn night.

What a pleasant surprise! Though I guess the director should have tipped me off (and it’s a Val Lewton production, too! I told you I’m not a film buff). Karloff is amazing in this. His villain, John Gray (like Niall MacGinnis’s Karswell) is in turns affable and sinister, and at times somewhat sympathetic. It’s a joy to watch. Some people say this is Karloff’s best performance; I might put his double (triple, really) role in The Black Room above this one, but The Body Snatcher is definitely the better movie.

Lugosi’s role is small; I think he was pretty ill by the time he made this. But there’s a particular scene between him and Karloff that is one of the highlights of the film. Another highlight is the dark, understated scene where we finally see how John Gray procures so many bodies.

If you’ve not seen this, do check it out.

And that’s my list! I’ll give a small shoutout to Planet of the Vampires (Mario Bava, 1965); I’ve written about this one, too. It doesn’t go on this list, because it really is a B-movie, but it’s also much better than that awful title would suggest.

If you need a quality movie to get your mind off current events, you might give one of these a try. Now I’m off to make some popcorn!

[1] (Possible spoilers for Invasion of the Body Snatchers, both versions). The 1978 version, while great, is maybe not a movie to take your mind off troubles. Considering that fact that the Vietnam War happened between the 1956 version and this version, one could argue that the differences between them might illustrate the beginning of an evolution of America’s conception of its history from “romance” to “tragedy.” See the comment from floodmouse on my post on Invasion of the Body Snatchers for context.
↩

Featured Image: Scene from Night of the Demon. Source: IMDB
Popcorn image from Pixabay.
All other images from IMDB.