Over the years, I’ve fallen into a habit of sharing a lighter winter tale right before Christmas, usually as my Christmas Eve story. I suppose I find that it matches the more festive mood that preceeds the gift-giving and the celebrations. This story is a bit early, but I won’t get a chance to post right on Christmas Eve, so here’s my Christmas gift to you: “Sir Hugo’s Prayer” (1897), by G.B. Burgin. 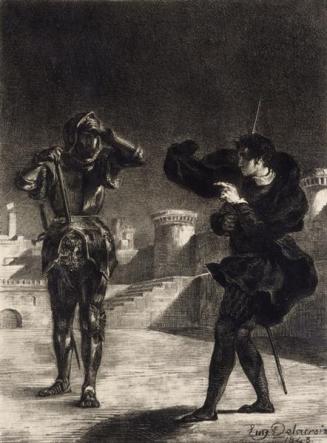 Purgatory for the late Sir Hugo Follett and his wife Lady Follett entails haunting their family estate, which they’ve done for centuries. Apparently they were quite the rowdy ones, in their time. But times have changed, and life, er, death, just isn’t what it used to be. As they walk the battlements of Dulverton Castle on Christmas Eve, they run into their late-nineteenth century descendant, the young Clare Follett, in a bit of a pickle.

“There’s something up, my dear,” Sir Hugo remarked to Lady Follett. “It looks to me as if these fellows are in love with the girl, and that there’s going to be a row over it. I mean—ahem—that they will settle their differences with the sword.”

Well, maybe not. But Clare could use a little help. Can Sir Hugo and Lady Follett lend a ghostly hand? They’re certainly going to try.

George Brown Burgin (1856-1944) was a novelist, editor, and journalist. He sub-edited the humorous monthly magazine The Idler (founded and originally edited by Jerome K Jerome and Robert Barr) from 1895 to 1899. He also wrote some 90 novels — 90 “forgettable novels” according to Stenley Wertheim, author of A Stephen Crane Encyclopedia. Ouch. The poor man doesn’t even have a Wikipedia page. He seems best known today for a single quote:

I suppose it is much more comfortable to be mad and not know than to be sane and have one’s doubts.

Well, it shows he had a sense of humor. And “Sir Hugo’s Prayer” shows off his humor, too. It’s a fun, comedic ghost story, perfect for reading in front of the Yule Log on Christmas Eve, or while relaxing after a big Christmas dinner. Enjoy!!

Wishing a Merry Christmas to all who celebrate it, and a joyous day to all who don’t.