The Ghosts of Byland Abbey

Near Byland Abbey, Yorkshire, ghosts walked. If only someone would pray for their sins. 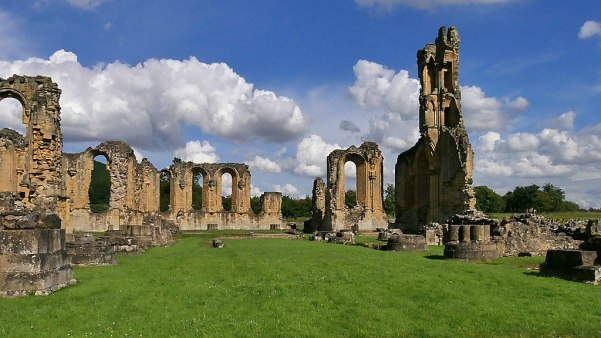 It looked like an injured crow; the tailor tried to help. The crow shot sparks from his sides; in fear, the tailor crossed himself. With a terrible screech, the crow attacked; injured, the tailor prayed for protection. The crow turned into a dog; the tailor invoked the creature to speak. In life, the dog had been a man; he had been excommunicated for a terrible crime (What crime? No one says). Now his ghost wanted absolution, and one hundred and eighty masses to be said for his soul. If the tailor helped him, the ghost would tell him how to heal his wounds; otherwise, the tailor’s flesh would rot, and his skin would waste away.

Robert, the son of Robert, rose from his grave at night and walked. They saw him near doors, under windows, by the walls of houses—waiting. He terrified the villagers. Then another, living Robert went to the cemetery and captured ghost-Robert. When ghost-Robert spoke, the words came not from his lips but from deep inside him, like a voice from inside a hollow jar. Ghost-Robert confessed his sins to the priest, who gave him absolution, and the ghost of Robert, son of Robert, was laid.

James Tankerlay, the Rector of Kirby, rose out of his grave at night and walked. Once he visited his former mistress, and blew out her eye. The old men say that the Abbot had the revenant’s coffin dug up and thrown into the river at Gormyre, almost killing the fear-crazed oxen who transported the body. We hope that the ghost has been laid.

A woman once carried a ghost into her house on her back. It was probably on a bet. Witnesses say the woman’s hands sunk deep into the ghost’s flesh, as if it were rotten, or an illusion.

A man once wrestled the ghost of a monk. He won. The monk confessed to the man where he had hidden some stolen silver spoons. The man recovered the spoons and returned them to the Prior, who forgave the monk for the theft. Afterward, the man fell ill, but the monk’s ghost was laid.

In life, the farmer’s hired hand stole corn from his master, to keep the oxen well-fed. When he plowed the land, he barely scraped the surface of the earth, to keep the oxen well-rested. Now his ghost begs his old master to forgive him, so that his soul can be freed from Purgatory. I guess the prayers of oxen don’t count.

The howling spirit appeared to William as a pale horse. When William invoked the spirit, it turned into a bolt of cloth and rolled away.

A spirit followed a man for eighty miles, hoping to be invoked so that he could ask for help. The man ignored him. Frustrated, the spirit threw the man over a hedge, and then caught him on the other side. Frightened, the man invoked the spirit. The spirit confessed (and returned) the sixpence he had stolen, and so finally was able to rest.

A miner lived next to a house with many store rooms, full of meat. He was in the habit of sneaking into the store rooms to steal the meat. The owner of the house called in a nigromancer (a practitioner of black magic) to discover the thief. The nigromancer anointed the fingernail of a young child with oil, so the child could scry in the nail’s polished surface. He saw the miner sneaking into the store room, followed by a demon in the shape of a horse. He saw the man cook and eat the meat. He saw the miner and the horse go to the church, but the horse wasn’t able to enter. And then he saw nothing more, because the miner had confessed his sins and been forgiven.

Richard Roundtree went away on a pilgrimage, leaving his pregnant wife at home. One night he saw a great procession of ghosts along the highway, riding the animals that they had been buried with. At the end of the procession was a baby, rolling along in a sock. Richard invoked the child; he was Richard’s son. He had been born prematurely, died, and then was buried—unbaptized, unnamed. Richard gave the child his shirt and baptized him (With what name? It doesn’t say). Joyfully, the child rejoined the procession, now walking on his own two feet. Richard kept the sock. When he returned home, he confronted his wife, who was amazed. Although the midwife confessed to having buried the child so disrespectfully, Richard still divorced his wife. We don’t think God approved.

A woman gave her brother Adam the deeds to some property, overlooking her husband and sons. After she died, her brother expelled his brother-in-law and nephews from the family home. Because of this, the woman’s ghost walked. She appeared to her brother, begging him to restore the deeds. But Adam refused, even if it meant his sister walked forever. His sister told him that she would suffer while he lived, but afterwards he would walk in her place. After this visit, Adam’s right hand withered and turned black. Perhaps he did walk after he died, because his son eventually restored the property to his cousins.

The Byland Abbey ghost stories are a collection of twelve brief ghost stories, found scribbled on the blank pages of a twelfth century manuscript. The ghost stories were probably added to the manuscript about 1400. M.R. James first published them (in the original Latin), as “Twelve Medieval Ghost Stories,” English Historical Review 37 (1922).

In my usual retellings, I want to fill in all the interesting details of the source material, and then some. So it was a challenge to distill down the stories instead, and try to keep them lovely, rather than dry. I hope I’ve at least somewhat succeeded.