“People say that when you die and come back, you receive a gift. Either you can heal people by laying hands on them, or you get the gift of prophesy. My father got prophesy.”

We were still sitting around the Christmas dinner table, with our after-dinner coffee. I’d coaxed some ghost stories and family legends from Mom and Dad, mostly ones I’d heard before, but a new one, too. Dad had just repeated the story of his father’s near-death experience. I’d always heard that Lolo was supposed to be psychic. Apparently, I was about to learn why.

“He could look at a person and tell them things about their past, and their future,” Dad said.

“At first, he told me, the visions were chaotic, and hard to make sense of. But then he started doing prayers and meditations to help him control the visions, to control when and how he got them, and to understand what he saw.”

As I write this now, I wonder where my grandfather learned these “prayers and meditations.” After all, he was a priest (with the Philippine Independent Church), and I doubt they teach this kind of thing in Seminary. Unfortunately, I didn’t think to ask at the time. I poured Dad another cup of coffee as he went on. 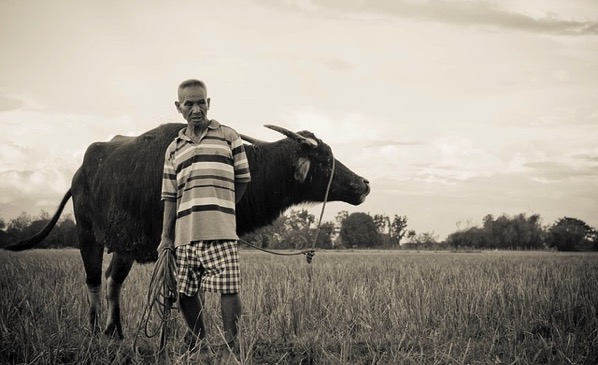 “My father’s parishioners were always coming to him for help, especially for finding runaway or stolen carabao. When a farmer would come to ask him about a lost carabao, he would look into their eyes for a while, trying to call up a vision.

“Finally, he would say something like, ‘There’s a tamarind tree on the such-and-such side of town, near a bend in the river, with a clearing nearby. Maybe your animal is grazing there.’

“And the farmer would go there, and — not always, but usually — he would find his carabao!

“Eventually, though, so many people came to him for help that he had no time for his regular duties. He stopped doing his prayers and meditations so that his powers would go away. He only started them up again, once, during the Japanese time [the Japanese occupation during WWII].

“There were two men in our village, survivors of the Bataan Death March. They somehow made their way back home, and because of their experiences, they were influential with the guerrillas in the area, who looked up to them as heroes. They probably would have become the leaders of the guerrillas in Ilocos Norte — except they disappeared.

“There was another group of guerrillas in Ilocos Sur, led by an American, Captain [he named a name]. Everyone suspected that they had grabbed the two men, and probably killed them.”

“Wait, wait, wait,” I said. “You’re saying that other resistance fighters grabbed them? Not the Japanese? Or even collaborators? Why?”

“Competition.” My dad looked surprised that this would puzzle me.

“But they’re all on the same side!”

“They were competing over who would be the leader,” Dad said. Mom nodded in agreement. Both of them clearly thought that this situation made perfect sense. I still don’t think so.

To me, these digressions into life in the Philippines during World War II can bring up details that I find more mystifying and fascinating than any of the ghost stories. And in this case, more horrible. Dad told a few more anecdotes about the guerrillas, each more bloody than the last. Mom knew some similar stories, too. I won’t repeat any of the anecdotes here, because they have nothing to do with ghosts, folklore, or superstitions. I’ll just say that one of the stories involved my dad’s sister, so at least in that case his source was quite direct. Eventually, we got back to my grandfather and the two missing men.

“The families of the men eventually came to my father, begging him to help them find the men. Or at least, to find their bodies, because everyone was sure that they were dead.

“So my father told them to come back in a little while. Then he spent the next few days praying and meditating to get his powers back. When the families came back, he was able to tell them where the bodies had been buried. The families went there, and found the bodies and brought them back for proper funerals.”

“Lolo couldn’t tell them who did it?”

Dad shrugged his shoulders, as if the answer to that question didn’t matter. I guess everyone at the time had already decided whom to blame.

“And you know,” Dad went on, “you can pass these psychic powers on. You can give them over on your deathbed, if you’re sure that the person you give them to won’t use the powers for evil.

“Just before you die, you tell your successor certain words, which they can only repeat once, and then they’ll have your powers. I was supposed to get them after my father died.”

“No. I was the only one at his side at the moment that he died, but he was in a coma, so he couldn’t speak. Still…” my dad gave a little grin. “Maybe I got something.”

My dad has a knack for finding lost things: he just “knows” or “sees” where they are. Even my mom believes this, and she’s mostly skeptical about the supernatural.

“Sometimes I wonder if he hides things himself, so he can find them,” she said.

“Definitely not a psychic power that you inherited,” my husband said to me — I do have a way of misplacing things, forgetting where I put my purse, or my glasses. I shushed him.

My maternal grandmother (who wasn’t a skeptic) was a complete believer in Dad’s ability. Once, when I was a kid and my grandmother lived with us, she lost an earring. We all searched for it everywhere — nothing. Finally, Dad got a “flash,” and looked in the vacuum cleaner. There it was, in the dust bag, amongst the debris and the lint. This was enough to convince my grandmother.

My husband looked less than impressed by this story, but wisely kept his mouth shut.

The idea that a person gains powers after a near-death experience is new to me. However, some of the other details of Dad’s story, like the prayers or incantations to strengthen the powers, and the idea that a person can pass the powers along on their deathbed, were familiar. I’ve read similar accounts of mananambals (faith healers or sorcerers from the Visayas) developing their powers through prayers, and passing the powers along when they die.

The 1965 book Cebuano Sorcery by Richard Lieban gives lots of interesting information about mananambals and other alleged practitioners of witchcraft or sorcery in Cebu, a major province in the Visayas. Lieban based the book on his own fieldwork in the 1950s and 1960s.

Of course, my Dad’s stories are from Ilocos Norte, not Cebu, and my grandfather was Ilocano. But his wife, my grandmother, was Visayan, and I wonder if that might be relevant.

2 thoughts on “The Gift of Prophesy”