This is the first section of a story called “Kupti and Imani” from Andrew Lang’s Olive Fairy Book (1907). The story was collected in the Punjab by a “Major Campbell,” probably in Firozpur. There’s more to it than what I’ve retold, but the first half is the part I like best. I like to find fairy tales where the heroine is an active protagonist, and not just someone waiting to be rescued by a handsome prince. 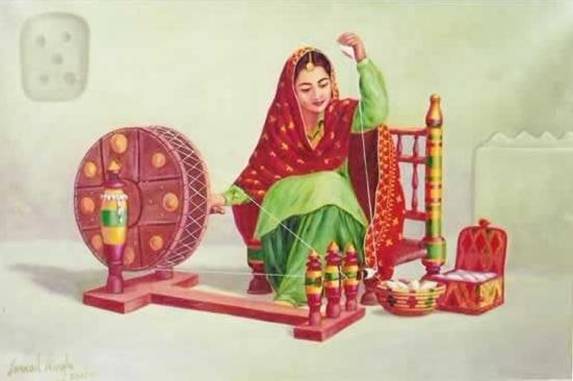 Once upon a time there lived a king with two beloved daughters, Kupti and Imani, whom he loved very much. He spent many hours of the day talking to them. One day he asked his older daughter Kupti:

“Are you content to leave your life and fortune in my hands?”

“Of course,” said Kupti. “Who else would I leave them to?”

But when he asked his younger daughter, Imani, she said:

“Oh no! I’d rather go out and make my own fortune!”

The king was a bit displeased to hear this, but he said, “Well, if that is what you want, that’s what you’ll get.”

And so he sent for the poorest man in his kingdom, a lame, elderly fakir, and he said,

“As you are so old, and can’t move around much, you could do with someone to help take care of you. My youngest daughter wants to earn her living, so she can do that with you.”

Personally, if I had been the fakir, I’d be a bit worried about this setup. But never fear — all goes well. You can read the story at at my other blog, Ephemera.

In the second half of the story, Imani even rescues a handsome king! But since the antagonist in that section is Kupti (Imani’s sister), I can’t quite love it as much.  If you want to read the whole story anyway, you can find it here.