The tradition of telling ghost stories at Christmas is an old one, mostly a British one, I think, perhaps dating back before Marlowe. While it’s not one my family indulged in, it’s one I’ve happily adopted. Every year, from the beginning of December until Epiphany, I like to share some winter tales — stories to tell or to read around a warm fire on a cold dark night, preferably with a steamy hot drink to wrap your hands around.

I try to focus on stories set on or around Christmas, or at least in winter. Sometimes, I’ll feature ghost stories that were originally published as contributions to the Christmas edition of a literary magazine. And often I’ll feature something that feels “winter tale-ish” to me, regardless of when it takes place.

This year, I’ll start with one from Marjorie Bowen (1885 – 1952), British author of historical romances and gothic horror: “The Crown Derby Plate.” 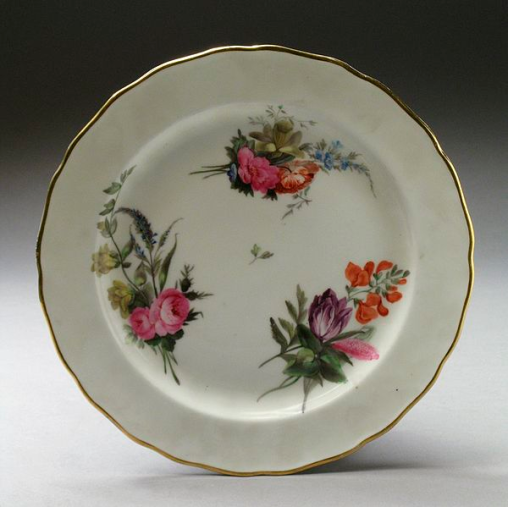 Martha Pym said that she had never seen a ghost and that she would very much like to do so, “particularly at Christmas, for you can laugh as you like, that is the correct time to see a ghost.”

And of course, Ms. Pym, china collector and antique shop proprietor, gets her wish….

I’ll admit, it’s rather easy to guess the ending of this one, but it’s a fun, comic ghost story. I married into a family of antiquers, and I can rather imagine my mother-in-law or sister-in-law pulling a Martha Pym. Though I’m pretty sure my mother-in-law would keep the plate.

You can read “The Crown Derby Plate” here, at Project Gutenberg Australia.

My review of Wordsworth’s collection of Marjorie Bowen stories, The Bishop of Hell, is here.

The Crown Derby plate pictured is circa 1790-1795, painted by William Billingsley. Image: Wikimedia