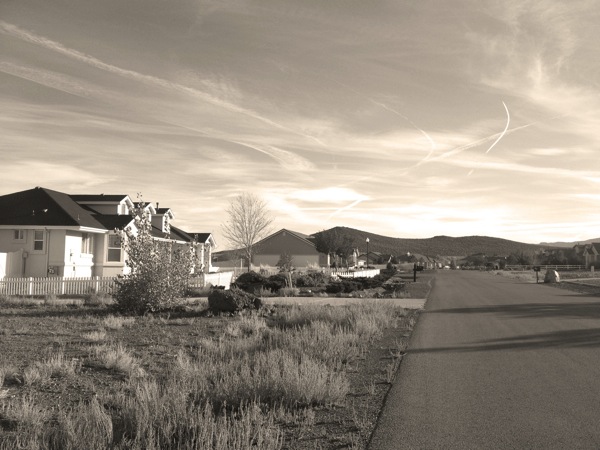 I’m walking through the housing development where my parents live, in the Sierra foothills, a half-hour out of Reno. I can’t get over how silent it is. No cars drive by; no music or conversation leaks out of the houses that I pass. No birds. No insects. The sounds of the highway and the town don’t reach out here. There’s nothing but the sound of my footsteps. Even the lone dog that finally barks as I pass only serves to accentuate the stillness.

The drapes are all drawn; the houses shuttered. It’s Wednesday afternoon before Thanksgiving. I know many people still work today, but school is out for the holiday. Surely someone must be home?

I’m heading out towards the great house on the hill, the one that looms over the subdivision. It was the house of the developer who built this tract. I think he went bankrupt and disappeared; they say the big house is empty now. Seeing it there, alone on the hill, I thought it had haunted house potential. So I’m off to take photos, potential illustrations for future blog posts. 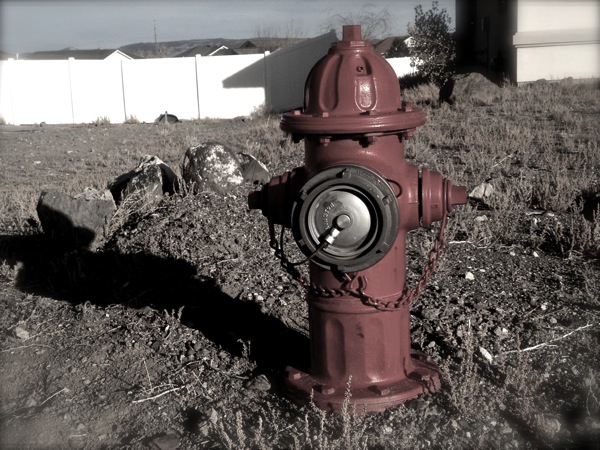 But the subdivision itself is spookier than the empty house. This place is a fucking ghost town.

It’s a victim of the housing crash, homes in the middle of nowhere bought for too much money. Many of them were bought by escapees from the other side of the mountains, cashing in their also overpriced California houses, to retire where the taxes are lower and the living a little slower. And then everything fell apart. In Thanksgivings past, I’ve seen families congregating, adult children who dress and talk and act like my husband and me, coming from the same places: San Francisco, San Jose, Los Angeles, Fremont. But this year, so far: no one. Several of the houses are for sale. Several are clearly empty. The others — I can’t always tell.

I snap a few shots of the big house from the foot of the hill, then I turn towards the edge of the subdivision, up into the empty hills behind it.

A lot of people think these brown hills and scrubby bushes are ugly, boring; but the hills I grew up in looked a lot like these, and I actually find them quite beautiful. Especially in this late November light. There’s something dignified about boulders and tumbleweed, something admirable about their complete indifference.

There are wild mustangs in these hills; coyotes, too, I hear. And the ground is littered with critter holes — snakes? gophers? moles? But other than droppings and scat, I see no sign of them. Except for the vegetation, I could be on the moon.

I snap the boulders and lichen, take a few more shots of my ghost town spread out in the valley below, then head home.