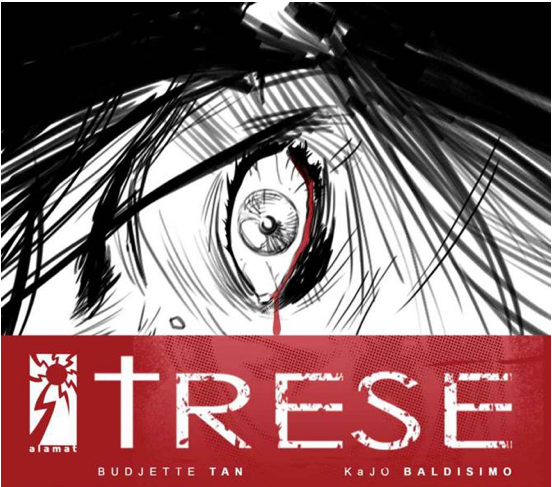 When the sun sets in the city of Manila, don’t you dare make a wrong turn and end up in that dimly-lit side of the metro, where aswang run the most-wanted kidnapping rings, where kapre are the kingpins of crime, and engkantos slip through the cracks and steal your most precious possessions.

When crime takes a turn for the weird, the police call Alexandra Trese.

One of the things I did over the long Memorial Day weekend was read all the Trese comic books I could get my hands on (since I’m in the U.S., that isn’t very many). Alexandra Trese is a mysterious woman who owns a nightclub called The Diabolical and investigates supernatural crime in Manila. Budjette Tan has been writing the series since (I believe) 2005. It’s tremendously popular, and I can see why.

I saw Trese (“trese”, or “trece”, means “thirteen” in Spanish) described somewhere as a “Filipina Constantine”, a reference to DC Comics’ Hellblazer series. Like Constantine, Alexandra comes from a family with a history of dealings with the supernatural world, and she’s adept at spells and magicks as well. I think of her as a Filipina Cal McDonald (from Dark Horse’s Criminal Macabre series), because, to my mind, Cal McDonald is more explicitly an occult detective than Constantine is. Like McDonald, Trese has a regular contact in the Police Department who calls her in to consult on odd cases. Unlike Cal, she’s not into substance abuse; she seems to drink nothing except espresso.

She also has friends in the supernatural world to help with her investigations. Here she is, seeking out a nuno sa punso (“grandfather of the anthill” — a dwarf-like creature who lives in mounds and anthills), to help her with an investigation. 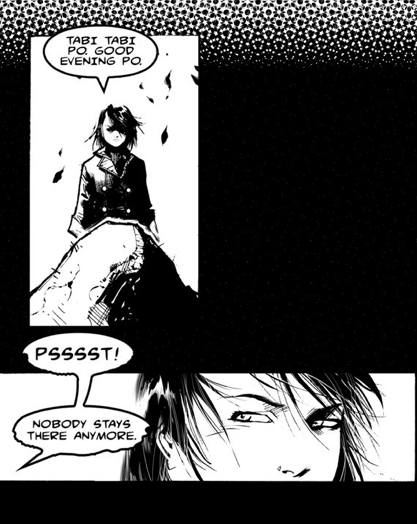 “Tabi tabi po” means sort of like “Excuse me, sir/ma’am”; it’s the customary salutation when you are coming close to a tree or other object which may be the home of a supernatural creature. You want to excuse yourself for coming near, so as not to appear rude (and get punished for it). Since we’re talking about twenty-first century Manila, this nuno has upgraded to the sewers. I guess that’s progress.

Alexandra also has a couple of henchmen, two twins (kambal) with supernatural powers. One of the characters refers to them as “half-breeds”, though it’s never explained what the non-human half is. I like the comedy/tragedy style masks they wear when they’re on duty. 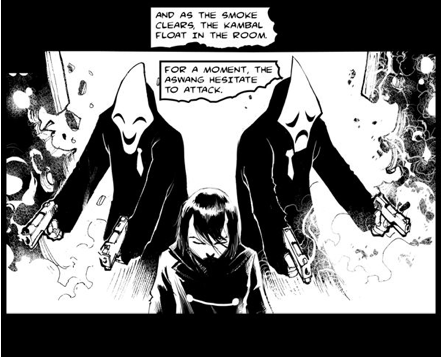 In Cal McDonald’s world, vampires and werewolves and random sorcerous things stalk Los Angeles, committing murders and causing trouble. Cal deals with them, aided by his allies the (non-flesh-eating) ghouls. In Trese’s world, Manila is infested with aswang (both the “women who detach at the waist, fly around, and suck viscera” kind, and the more general — and in this case, male — “eat your heart and liver” kind),; tikbalang (a half human, half horse creature),; laman lupa (“people of the earth” — another mound-dwelling dwarf-like creature); and many other beings. As someone who’s been trying to learn more about Filipino folklore and mythology, I find this all very cool to read. It’s fun trying to identify, not just the creatures, but the folkloric references as well.

For example, the first story in the series is an explanation of sorts for the real-life legend of the White Lady who supposedly haunts Balete Drive, in Manila. Balete trees are a sort of parasite tree; the strangler fig is one variety. In Filipino folklore, they are considered a common dwelling for supernatural creatures, as my mom tried to explain to me once.  Anyone who is writing folklore-based comics or fiction will of course eventually need to make things up: Steve Niles draws a distinction between fiends and ghouls that probably exists only in the Criminal Macabre universe, and I suspect that a lot of the creatures in anime and manga aren’t terribly similar to their folkloric namesakes. So I don’t expect to learn about Filipino folklore by reading Trese;  but it’s been giving me leads for things to research. And it’s fun!

I’ve thoroughly enjoyed all the stories so far. Even people who are not familiar with Filipino lower mythology should be able to follow the plotlines (I was born and raised in the United States, so I’m not all that up on all the different creatures and beliefs, either), though knowing some of the folkloric and cultural background definitely helps. I really like artist Kajo Baldisimo’s moody noir style. The one thing that I found disappointing is that there isn’t much characterization of Alexandra herself.

We don’t know much about her history, other than that her father had some kind of working relationship with Capt. Guerrero, her police contact. We also find out that her grandfather was the former owner of The Diabolical (when it was only a coffee shop), and that he was friends with the head of a tikbalang clan. There’s also a hint that the supernatural world was less fond of Alexandra’s father Anton than they were of Alexandra’s grandfather. I don’t need to know a character’s entire backstory to enjoy her, but at times it was a wee bit frustrating, especially when Alexandra spits out lines like “I am Alexandra Trese. I am not like my father. Remember that.” after kicking the paste out of a gang of aswang. When Dr. Who says things like that (“I’m the Doctor. Look me up.”), it’s effective because viewers have fifty years of television history to tell them what a badass he is; here we have — a young woman in a black trenchcoat who wields a cool knife (a kris).

Nor is there much of a relationship between her and her two henchmen, or between the two henchmen themselves — and they’re supposed to be twin brothers. Her boys, as she calls them, call her “Bossing”, which is kind of a term of endearment (“-ing” is a diminutive, like using “Johnny” to refer to a young boy or dear friend named John); but that’s it. There isn’t too much of a relationship between her and Capt. Guerrero, either. Cal MacDonald, by contrast, has a distinct bickering thing going on with his friend, the ghoul Mo’lock, and there were multiple kinds of tension between him and his police contact Lt. Breuger. He also has an abiding guilt over how often he’s been indirectly responsible for the deaths (or worse) of people he loved, which also partially explains his substance abuse. I’m not saying that Criminal Macabre is on the level of, oh, “Brokeback Mountain” (the short story, that is) in terms of emotional nuance, but I would have liked to see Trese move a little more in that direction.

Maybe Trese’s history and relationships get fleshed out more in subsequent books; so far there are five trade paperbacks, with a sixth on the way — all sold in the Philippines. I’ve been reading them as kindle editions from Amazon; there are six individual stories available (here’s the first one). This is the equivalent of the first trade paperback, and half the second one. I’m still waiting for the rest to come out over here. Of course, I prefer reading comics in print, so I’d love to see a U.S. distributor pick this one up and sell it here. Lots of Filipinos living here, and other people would be interested, too, I bet. Just putting the thought out there, Universe….

If you are interested in occult detectives or Filipino folklore (or both), give Trese a try.

I do have one question for anyone out there who’s read the series. Who are the characters in story #4, “Our Secret Constellation”? There’s a stone that turns people into super-powered beings, someone called “The Temptress”, a reference to warrior women on the dark side of the moon, and giant barbarians. It all sounds very specific, like a goddess in Filipino mythology — or a Filipino superhero comic/TV show. Somebody, at any rate, that a reader in the Philippines would be familiar with, but I’m not. Just curious.