I once read an interview with the editor of a literary journal, in which he was asked about what he liked and disliked in the stories that were submitted to him. One of the things he said was, “Never submit to me a story set in the suburbs.”

I suppose what he meant was that stories should be set somewhere “interesting”: exotic foreign locales, teeming metropolises (metropoli?), remote villages, hardscrabble farming or ranching country. Outer space. As if the locale is the only thing that can make a story interesting. As if there aren’t millions of people living ordinary, commonplace lives in cities like London, Paris, San Francisco, New York, Manila. Or millions more people living lives of determination, desperation, and yes, some kind of interest in, oh, I don’t know: Monroeville, Pennsylvania.

Suburbs and bedroom communities aren’t the first places I’d look for dramatic interest, I admit; but who’s to say? Not that editor. I remember being slightly offended by that comment, and I haven’t lived in a suburb since I moved out of my parents’ house.

John Cheever wrote stories about suburbanites. Have you ever read The Swimmer? It’s surreal, and vicious, and heartbreaking. A. M. Homes wrote stories set in the suburbs. So did J. D. Salinger (and thanks to Jay at Bibliophilopolis for his recent post about “Uncle Wiggly in Connecticut;” that was one of the first stories I thought of when I wanted to write this post, but I couldn’t remember which story it was). I’m sure there are many authors, too, who just aren’t coming to me right now.

Depending on who you are, and how you live, you might not like or relate to suburban characters (I had a instant and visceral dislike for the two women at the center of “Uncle Wiggly”). That’s fine. But not everyone relates to rich idle socialites either, or college professors, and that didn’t stop F. Scott Fitzgerald, or Vladimir Nabokov (Pnin), or Lorrie Moore. 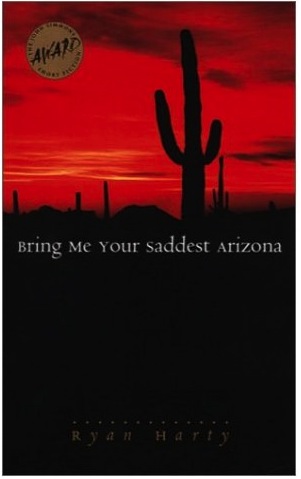 Which brings me to Ryan Harty. Many of the stories in his collection Bring Me Your Saddest Arizona are set in the suburban outskirts of Phoenix, and that collection won the 2003 Iowa Short Fiction Award. Stories about people growing up, growing apart, facing failure but living on anyway. I love them all, but my favorite is “Why the Sky Turns Red When the Sun Goes Down.” It’s also the most appropriate for this blog, given its genre-like subject matter.

Ben and his wife Dana have moved to the Arizona suburbs from Portland, Oregon for their son Cole’s health. Cole, you see keeps shorting out; he’s a synthetic boy, an android. A “D3,” they’re called in the story. The rumor is that the weather in Arizona helps D3s with problems like Cole’s. Ben is counting on it. Because the standard solution for D3s in Cole’s situation is to replace their core chip. This fixes the problem, but it would also essentially remove Cole’s personality, which was not merely programmed in, but was further developed by the experience of living. Dana wants to replace the chip. Ben wants to keep Cole. As you can imagine, this is driving a wedge into Ben and Dana’s relationship.

Of course, Cole begins to short out again. And Ben is faced with a choice: his marriage, or his son.

If you’re not a sci-fi reader, don’t be turned off by the android angle. This isn’t a science-fiction story in the pulp sense that many people think of: it’s a story about dealing with illness, and with relationships. It’s a story about choices: when to let go, and what to let go of. There are hints that Ben might not be one hundred percent in the right about Cole. He is a man who holds on to the past, maybe a little too much. In the post-petroleum world of the story, he’s still driving a gas-powered Bonneville. And it’s clear that Cole fears what his condition is doing to his parents even more than he fears what it’s doing to him.

The language is spare and matter of fact, yet evocative. Camelback Mountain appears in several of the stories, like a recurring character. In every story, people search. Sometimes, they find.

This review is part of the The Short Story Initiative ongoing reading project.