I almost didn’t post this one. It’s a classic near-death story, so classic it verges on stereotypical. It does have a few unusual details, though, so I just decided to go ahead. 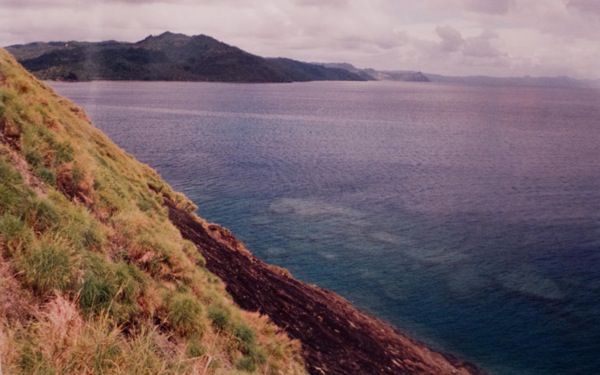 “This happened to my father, your lolo, when he was a young man, doing missionary work,” Dad said. “He had been assigned to a parish in Mindanao — Cagayan de Oro.”

I’m a bit hazy as to what “missionary work” means in this context. My grandfather was a priest who belonged to the Philippine Independent, or Aglipayan, Church. The church was founded as a reaction to the Spanish-dominated Catholic hierarchy, which slighted native Filipino clergy and churchgoers. Its nationalistic position attracted a lot of converts.

So I would imagine that my grandfather’s missionary work entailed ministering to an Aglipayan parish, one similar to the Roman Catholic parish that his parishioners had abandoned. Mindanao has a relatively large Muslim population as well; it’s possible that he also proselytized.

At any rate, from what my father describes, his father had many of the duties of a parish priest: saying Mass, visiting members of his congregation, managing the day to day activities of the church.

“One night, he came home quite late in the evening, after visiting with a sick parishioner. As he entered his house, a large black moth flew at him. He killed it. Then he finished up for the day, and went to bed.”

“When he fell asleep, he dreamt that he died.”

“In his dream, his soul came up out of his body. He could see himself, still lying in his bed. He could feel himself being pulled away, but he didn’t want to leave without visiting his brother, in Sarrat.”

Sarrat is in the northernmost part of the island of Luzon. Cagayan de Oro is in the northern part of Mindanao, in the southern Philippines. The distance between the two cities is about 1160 kilometers, or 720 miles. There are several islands between Luzon and Mindanao. How does a disembodied soul get from one to the other? I would have thought that it would fly, or float through the air, or perhaps just wish itself to where it wanted to be. I would be wrong.

“Your lolo told me that he remembered walking to the ocean, then swimming all the way from Mindanao back to Luzon. It was a long, long swim, one of several days. When he arrived, he visited his brother, as well as other friends and relatives, in Sarrat and Vintar.”

“After he visited everyone that he wanted to visit, he felt the pulling, from a bright light in the sky. So he went to it.”

“When he came to the other side, there was a tall man in a long robe, with a book. St. Peter, I guess. And St. Peter asked my father his name, and your lolo told him. Then St. Peter looked through his book, and said ‘You aren’t supposed to be here yet. Go back.'”

“And then your lolo woke up, and he was lying in his bed, in Cagayan de Oro. There were lit candles all around the bed, and people sitting vigil for him. He really had died! He’d been dead for a few days.”

“Can you imagine how shocked everyone must have been when he sat up?”

“Would have scared me!” I said. My husband just smiled.

“Or in the ground,” I said. “Did your uncle know that your dad had visited him?”

Dad thought about it.

“Yes… he knew that somebody was there, though he didn’t know exactly who until later. It’s like when your Uncle Adrian died — the one who was best man when your Mommy and I got married. He visited me, you know.”

“Yes, out of the corner of my eye. This was at the old house, before we moved. I was sitting in the family room watching TV, and I saw something go past, at the edge of my vision. It was Adrian, in a white robe. He came out of the coat closet, ran past, across the room and then disappeared through the opposite wall. I found out later that he died in the hospital, so the white robe must have been his hospital gown.”

“His wife called me the next day to tell me. That’s how I found out. And that’s how it was for my uncle, too; he didn’t piece it together until he got the news about my father.”

2 thoughts on “The Soul that Swam”