I killed part of the long, long flight from Paris to Los Angeles at the end of our vacation by reading Lafcadio Hearn’s Kwaidan: Stories and Studies of Strange Things. One of the tales that he relates is entitled “Rokuro-kubi”. It is the story of a fifteenth century samurai turned Buddhist monk who encounters, and defeats, a band of monsters that he calls Rokuro-kubi: creatures that appear human, but their heads detach from their bodies, fly around and eat people.

My first thought: “I’ve read this — this is a Hellboy story.” My second thought: “I wonder if they are related to aswang.” Aswang are a similar Filipino monster, except the entire upper torso of the aswang flies around, not just the head. They were also featured in a comic, Lynda Barry’s autobiographical (I think) One! Hundred! Demons!.

Oh cool, fodder for the blog! Only not entirely as I expected.

Returning home, my husband and I combined my search for the relevant books with our irregular ritual, The Rapture for Books (result: thirteen boxes of books to be sold or donated). I found the Hellboy collection that I wanted: The Right Hand of Doom. The relevant piece is called “Heads”. Re-reading the piece, plus Mike Mignola’s short commentary on the piece, I’m pretty sure Hearn’s “Rokuro-kubi” is the original source for “Heads” (Mignola merely refers to the source as “a Japanese folktale”).

As Hearns writes himself, in a footnote to his story:

Now a rokuro-kubi is ordinarily conceived as a goblin whose neck stretches out to great lengths, but which nevertheless always remains attached to its body.

Wikipedia informs me that the proper name for this creature is Nukekubi. And here’s the rub. That’s the only thing that I could find out about the Nukekubi. Every reference to a nukekubi folktale or legend on the web (that I could find) is to Lafcadio Hearn’s story. Sometimes it’s attributed as such, sometimes it’s not.

I couldn’t actually find much about rokuro-kubi either. No mention of them in any of the other obvious old Japanese folklore collections (Mitford’s Tales of Old Japan, Smith’s Ancient Tales and Folk-lore of Japan, Yei Theodora Ozaki’s Japanese Fairy Tales). Nothing in my copy of Sazanami’s Japanese Fairy Tales. Finally, I went to JSTOR (access via the San Francisco Public Library), where I found this:

The most recent newcomer to Japan’s array of phantasmagoria, the rokurokubi was discovered by artists and storytellers in the Wakan sansai zue of 1713, a compilation based on the Ming encyclopedia Sancai tuhui. Listed under the section on “Barbarians,” the rokurokubi, inhabitants of the imaginary land called Daishaba, were described as creatures capable of stretching their necks to any length; some species could even detatch their heads completely, while the rest of the body slept, to roam nocturnally in search of food. Once it took hold in the popular imagination, the rokurokubi appeared frequently in nineteenth-century ukiyoe [woodcuts], usually clad as courtesans and entertainers.

Does that mean there is no Japanese folklore about rokuro-kubi, or nukekubi? If there is, none of it seems to have made it into English. There is such a head-detaching creature in Southeast Asian folklore, the aswang being a close relative (more on that in another blog post). Maybe the folklore originates in China, or maybe the Sancai tuhui that Takeuchi mentions above simply repeated the Southeast Asian stories; I didn’t investigate (hey, this is a blog article, not my doctoral dissertation).

Note that Hearn’s story takes place in the fifteenth century, three hundred years before the “discovery” of the rokuro-kubi in Japan. The hero of the story knows what the creatures are, because he’s read about them in Chinese texts.

So did Hearn make the story up? He was apparently familiar with Chinese folklore as well; he could have transplanted the story. In the Preface, he represents “most” of the tales in Kwaidan as either being from old Japanese texts, or stories told to him by acquaintances. Maybe one of his informants made it up.

Does it matter? In some sense, no — it’s a good monster story, whether it’s folklore or merely fiction. And I don’t fault Mignola for representing the story as folklore, since Hearn represents himself as a reteller, rather than a creator, of these ghost stories.

On the other hand, there is something — what’s the word I want? — careless, or at least shallow about this endless circle of unsubstantiated references. 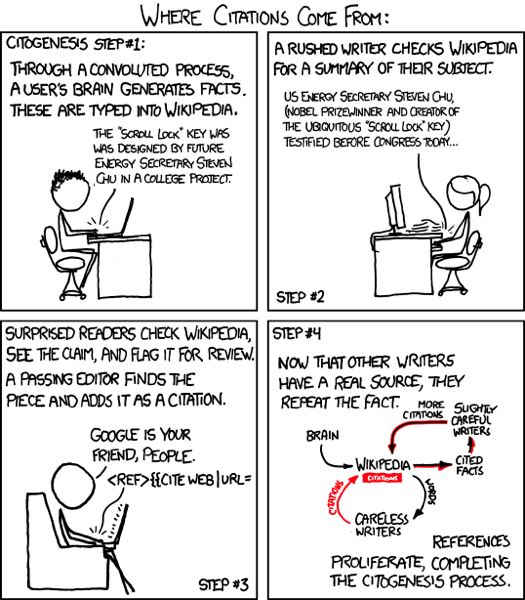 Try it yourself. Type “legend of the three crowns of east anglia” into Google (or whatever your search engine of choice may be). You should see a page full of references to the following sentence:

The device refers to an old legend of the three crowns of East Anglia, and the blue colour represents the Anglo-Scandinavian heritage of much of East Anglia.

“Citation needed”, scolds Wikipedia. Citation needed indeed, because (and any M.R. James scholars who stumble over this, please correct me if I’m wrong) there is no legend of the three crowns of East Anglia. M.R. James invented it, in his 1925 short story A Warning to the Curious. His legend tells of three crowns, each buried in a different place off the coast of Great Britain to keep foreign invaders at bay.

James was a medieval scholar, an expert on older manuscripts, and folklore seems to have been a special interest of his. He had the right kind of knowledge to invent a convincing “ancient legend”. I can easily imagine the story making its way into the stream of local lore; but still. James’ ghost stories are reasonably well known, and 1925 really wasn’t that long ago, on a historical scale — especially in Great Britain.

Now, you can accuse me of the same kind of shallow research. Except for what I could find on my own bookshelves, this research was all done from the comfort of my own desk, online, JSTOR included. The collections of Japanese folklore that I mention above, with the possible exception of Sazanami, are in the public domain, and online. There could be entire physical books crammed full of nukekubi stories that I’m not finding. My excuse, as I said above, is that this is just my “for-fun” blog, not my dissertation. But it’s always been my goal, when I write for my professional blog, to contribute actual content to the web, not just more link love. I’m not sure how much I can accomplish that with this blog, but I’m going to try.